I’ve been Thinking about Buying a Fitbit for Quite a While.

I’m Fascinated by the Concept of Counting Steps, Activity, and Heart Rate, among other things.

I put it off even though I wanted one, and the Reason I Hesitated was this:

The Fitbit I wanted was the Charge HR (The HR stands for Heart Rate), and the Price was $150. I could have gotten the Lesser Version which would have Saved me Money, but I liked the idea of also Keeping Track of my Heart, and if I was going to get one, it seemed silly not to Spend that Couple of Bucks more…

I Ended up Buying one because I ran into a Friend of mine who was Wearing a Fitbit. We started talking about it and he showed me all the Stats on his iPhone App.

He said he tries to walk 10,000 Steps a day and he’s been Wearing one for Months and Loves it!

His Testimonial pushed me over my Obstacle, and I said “What the Heck” and bought one at Amazon (Because I Trust them and they have a Return Policy)! (See the Charge HR HERE!) 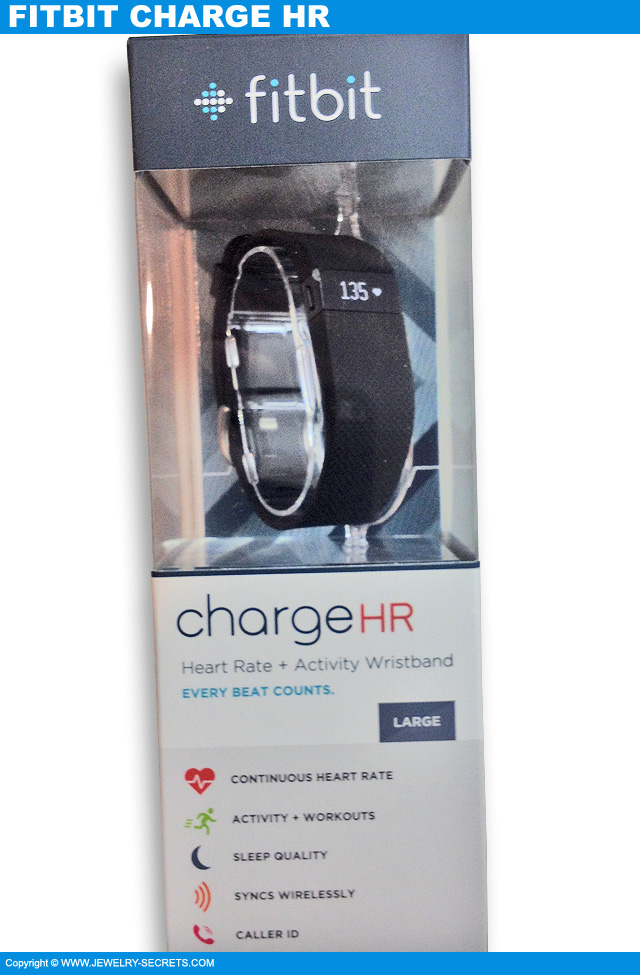 I get my Fitbit Charge HR a Few Days Later (I Ordered a Large, which fits my Wrist Perfectly, even though my wrist is 7.5″).

I left it sit on the counter for a Couple of Hours. I was thinking it would be a Long Complicated Setup and was going to put it off until the Next Day…

So I open it up and these are the Contents of the Box: 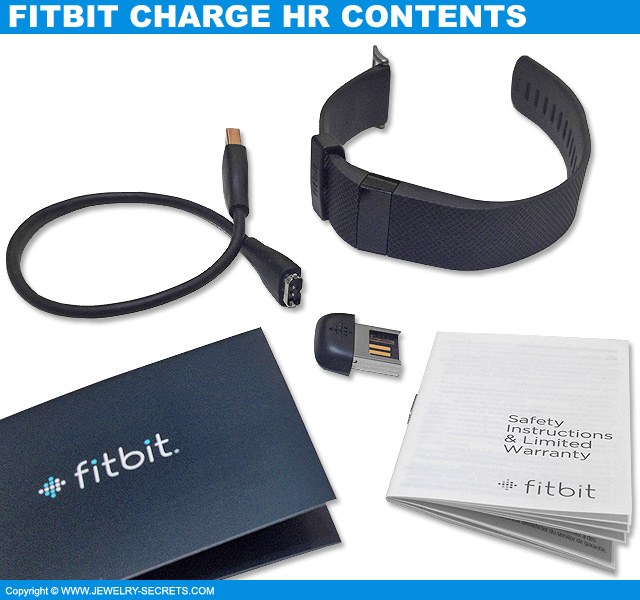 Then I looked at the Set Up Guide

It was Painfully Simple. 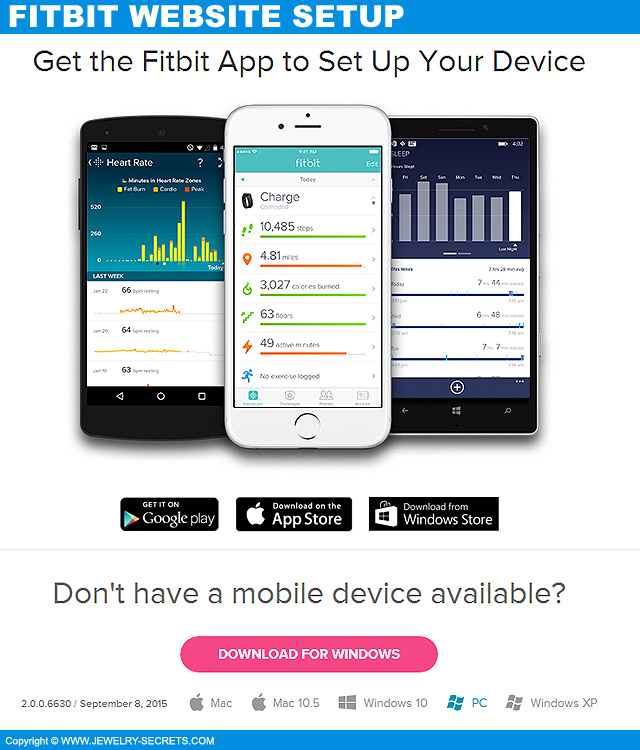 I went to the Website. It’s Basically nothing but a Link to Download the App for your Smartphone.

So I Grab my Apple iPhone and find “Fitbit” in the Apps and Download. 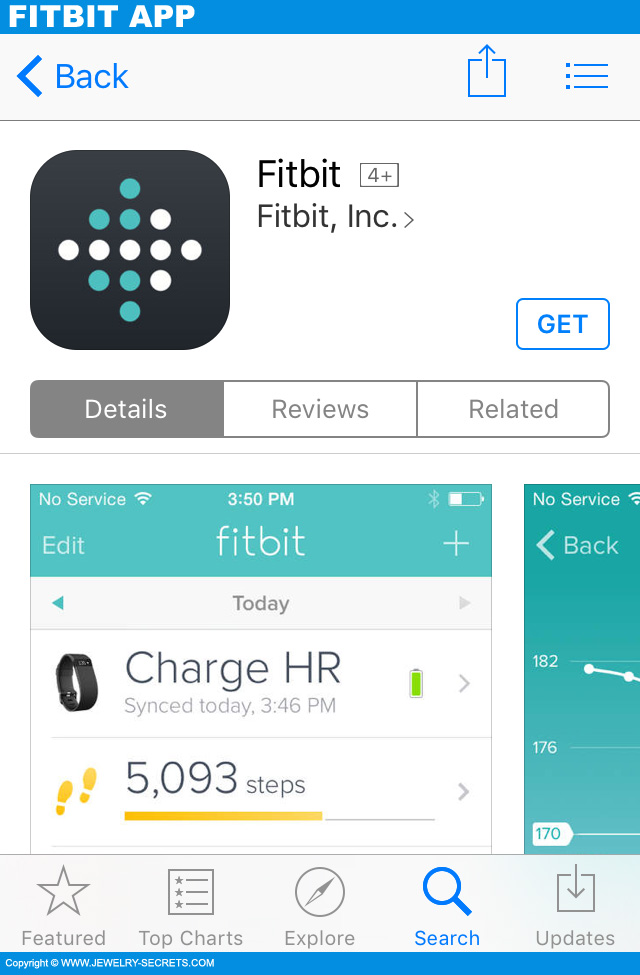 It tells you to Power On the Fitbit…

And then asks for some Basic Info about you… Age, Height, Weight…

And then it wants to Sync to your Device… 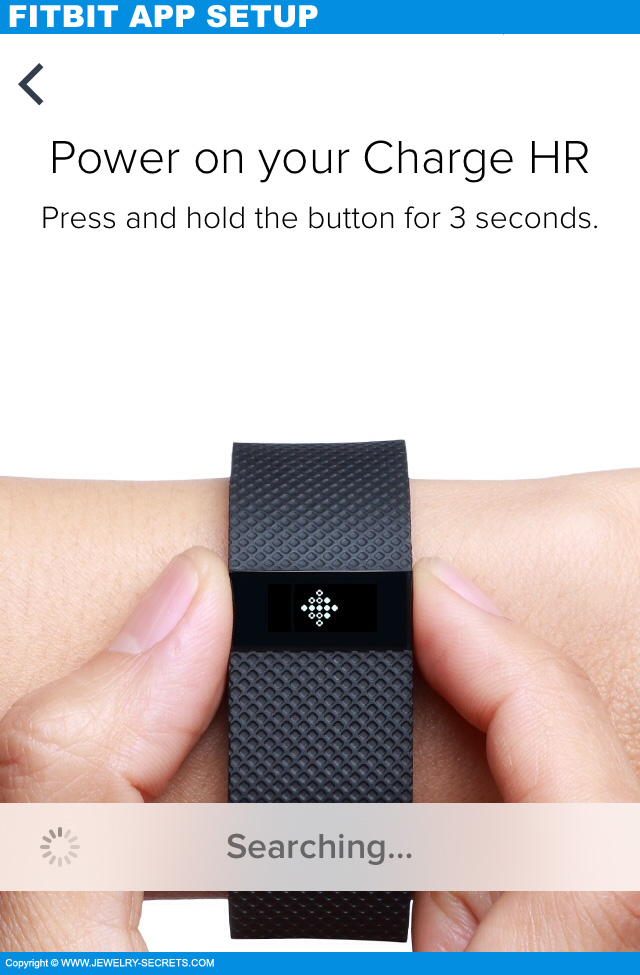 You Input 4 Numbers from your Fitbit into the App… 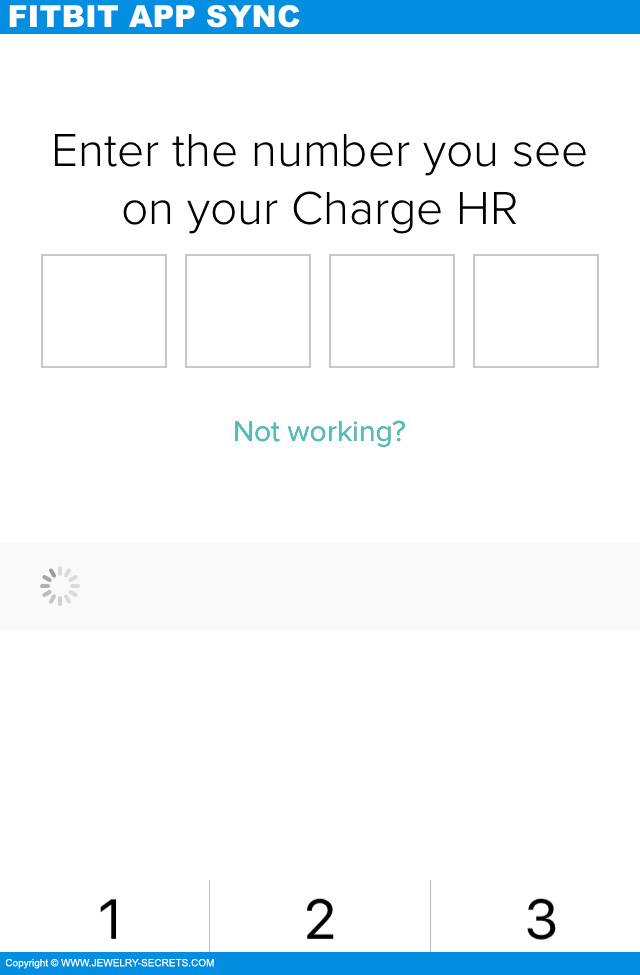 And then it Starts Syncing the App to the Fitbit… 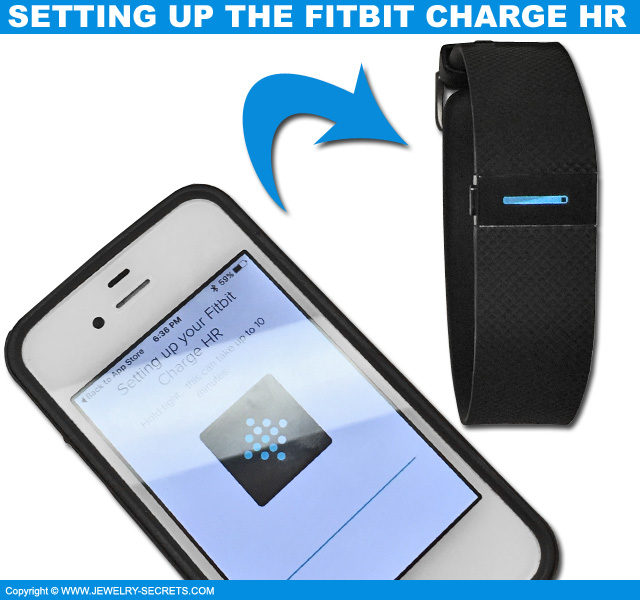 The Setup Seriously took just a Couple of Minutes, and it was STUPID EASY!

It Synced to my Fitbit Wirelessly in Seconds…

And in no time my Fitbit was Complete. 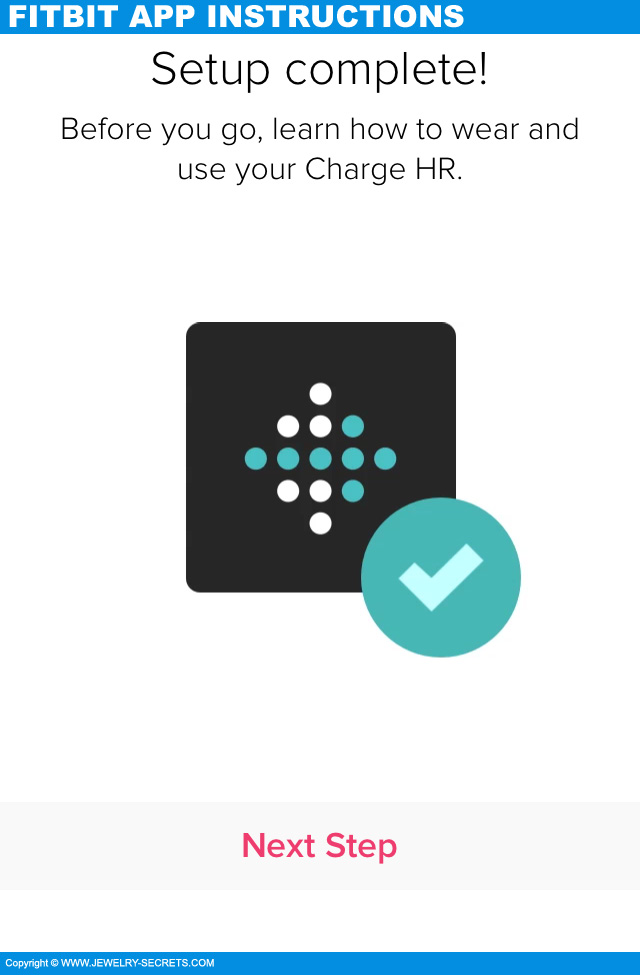 I was highly Impressed at how Easy it was.

The Interface is Really Clean and Easy to Understand… 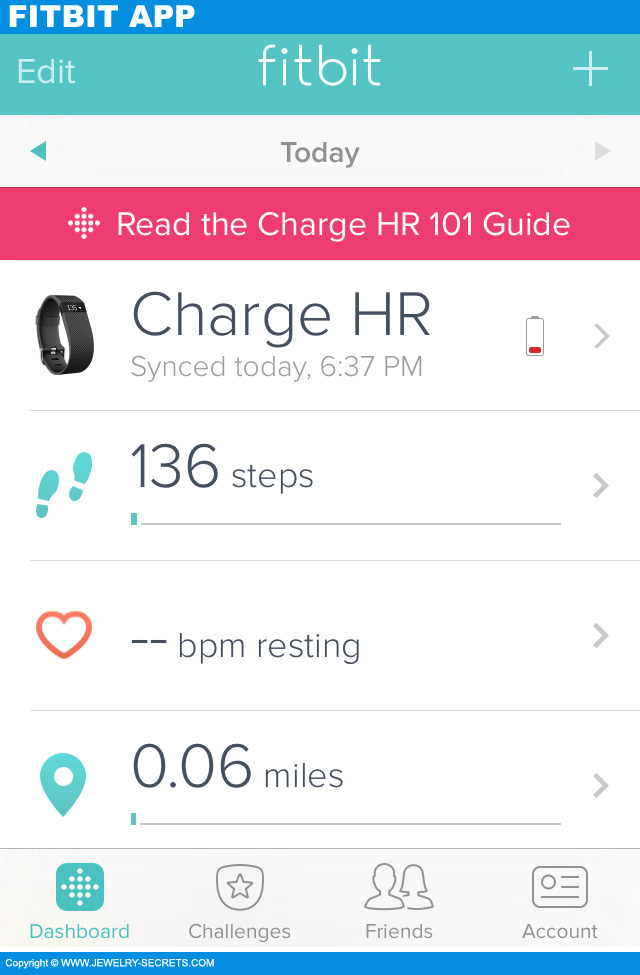 The Battery on the Fitbit was Low (it shows that in the App to Remind you to Charge it with the USB Cord Included), so I Plugged it in to Charge.

The Instructions said it would take 1-2 hours for a Full Charge, and once Charged it would last for about 5 Days.

I Plug it in, Eat my Chicken, and afterwards I checked the Battery. It was Fully Charged already (1 hour).

I put it on, Struggled with the Strap a little (until I Realized that there’s a Notch in the Strap that you have to pull up as you’re pulling the Band On and Off).

I put it on and it Began Tracking my Progress Immediately.

The Fitbit is made of Rubber and feels Very Light-Weight and Comfortable.

And when you Tilt your Arm up (like you’re looking at a Watch), the Dial LED’s Light Up and Shows you the Time (Or Time and Date, or whatever other Function you want to show up first).

And then, upon Pushing the Small Button on the Side of the Fitbit (once for each Function), it will also Display your Steps, Heart Rate, Distance Traveled, Calories Burned and Stairs Climbed, which you can see everything on the Fitbit, in the App (It Auto Syncs when you open the App), and Online (once it’s Synced from the App) as shown below in the Dashboard… 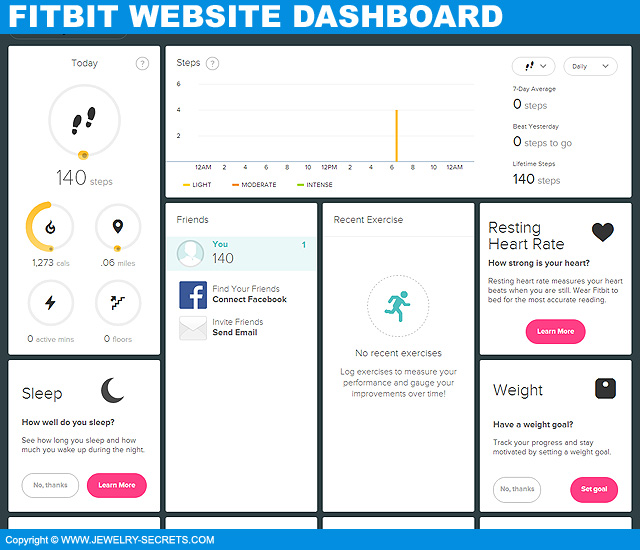 My Fitbit did come with 136 Steps already in the Device. I couldn’t find a way of Resetting that (online it says to Ignore those, they’ll drop off after Today anyway, and another Help Forum Stated that you can set those Steps to “Driving” Activity to basically Void them). I just left them, it’s not that Big of a Deal… That’s like Walking to the Fridge Twice! :)

I was actually Surprised at how many Steps Add up in one Day (I must take a lot of Coffee and Bathroom Breaks), because the First Night (from 7pm to Midnight) I traveled 584 Steps and Burned 1708 Calories.

The Next Day I did Much Better!

It does seem Pretty Accurate to me. I Tested it on Multiple Occasions throughout the Day (looking at the Current Steps on the Fitbit, Walking and Counting Steps, and then looking back at the Fitbit to Double Check the Results). It was within 1 Step!

And I didn’t realize how much I really Walk. Just to go from my Car to the Store was 100 Steps.

I also played around with Stride and Walked around the House Counting as I went just to Verify the Accuracy. It did really, really well.

I did notice that sometimes it Counts my Hand Movements as a Step though, but it Records All Activity, Heart Rate and Calories Burned.

So while it’s Not Perfect, it is the Most Accurate Activity Recorder on the Market.

I’m so Intrigued with all the Info it gives me (you’ll be Checking it Non-Stop).

The Difference of my Heart Rate during Resting and then During Activities is an Eye-Opener.

But one thing that Surprised me more than anything was this:

I’ve always had a Problem Sleeping. I Sleep Very Light, have to Listen to White Noise (I have an App for that, called Relax Melodies), and often have Insomnia. I Wake up Tired, am Restless, and find that around 2-3 each Afternoon, I get Very Sleepy. I know that’s a Downtime for Everyone, but I can always take a Cat-Nap in the Middle of the Day everyday.

This is what I saw: 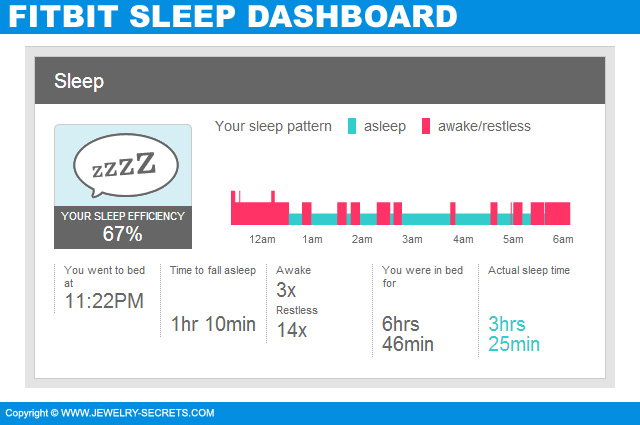 It took me 1 Hour and 10 Minutes to Fall Asleep. And then I was Very Restless (14 times), Woke up 3 times, Tossed and Turned all Night, laid there for 6 Hours and 46 Minutes, and only Slept:

No wonder why I’m so Tired all the time. I’m Not Getting any Sleep!!! And that 3 1/2 Hours of Sleep was all Broken up into Small Little Segments…

The Fitbit is making me way more Aware of my Body, Sleep and Activities.

And while it won’t make you Fit by Wearing one, it does make you Extremely Conscious of that Fact, and Forces you to want to become MORE Active to Achieve your Steps and Goals.

It’s just like a Calorie Counter, it makes you think about it. And that in itself is enough to Make you Take Action!

It’s Well Worth the Price!

I’m actually Quite Happy I Bought one.

I Wear it all the time and only Take it Off when I Shower.

My Fitbit Charge HR is Black, but you can Buy them in: Blue, Plum, and Tangerine. 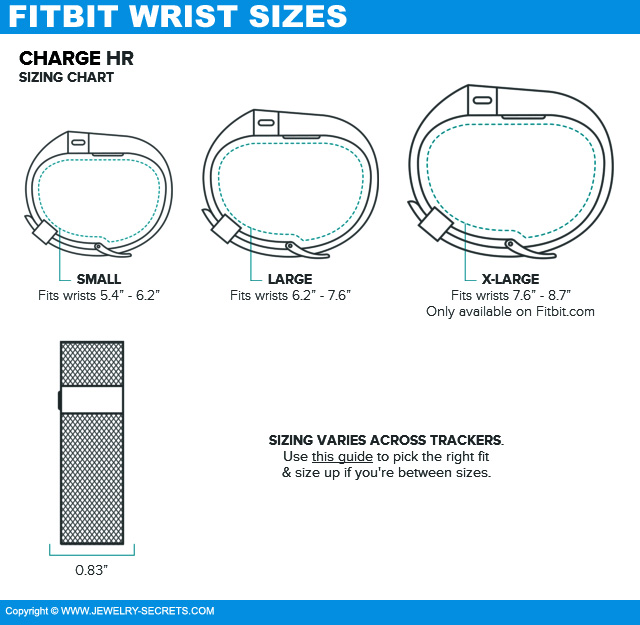 The Fitbit Charge HR has a Customization Display, along with the App and Online Log.

You can set Specific Functions and even Set your Stride and Run Length (In case you have Shorter or Longer Strides).

You can also set the Sensitivity to Dominant Hand, which will make the Counter Less Sensitive, so it doesn’t Record as much Hand Movements, which is what I did. :)

And, right before you Begin any Activity, Sleep, or Exercise, you can hold down the Button on the Fitbit (until it Vibrates) and it will Track that Activity, so it’s Easy to Log Later.

It’s Straight Forward, Very Simple, and the Two Green Flashing LED Lights on the Underside of the Watch are Ultra Cool!

If you’re Thinking about Buying one… 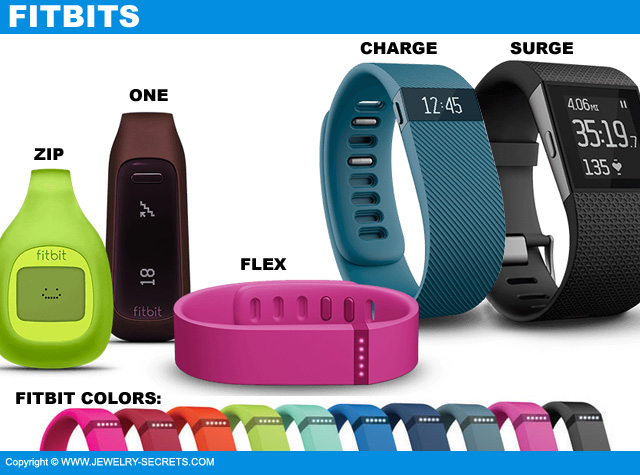 The Fitbit Charge HR will Change the way you Think about being Active. It will make you want to become more Active to Achieve your Goals.

Plus, it’ll also Count your Water Intake (8 Glasses a Day), Food Eaten, and many other things that will make you More Fit and Healthy!

Now you can also get a more inexpensive Version of the Fitbit, if you only want to Track a Couple of things. Like the Fitbit Charge does everything the Charge HR does except the Heart Rate.

And the Flex also Tracks Steps, Calories, Distance, Sleep and Active Minutes, but it Doesn’t Track Floors Climbed (Stairs), and it doesn’t have a Clock (Something I NEED since I always wear a Watch and my Fitbit Replaced that).

I could have also Bought the SURGE, which is much Bigger and has a Huge Easy-To-Read Face that shows everything at once (Versus pushing a Button to see them all), but the only True Differences (besides the Size of the Watch, Face and Hefty Price Tag) was that you could also Control Music, Notifications (like Text Messages), and it has a GPS Tracker. Neither of which Appealed to me, so the “Perfect Fit” for me was the Charge HR.

And you can also upgrade and get a PREMIUM Fitbit, which is more like a Personal Trainer… 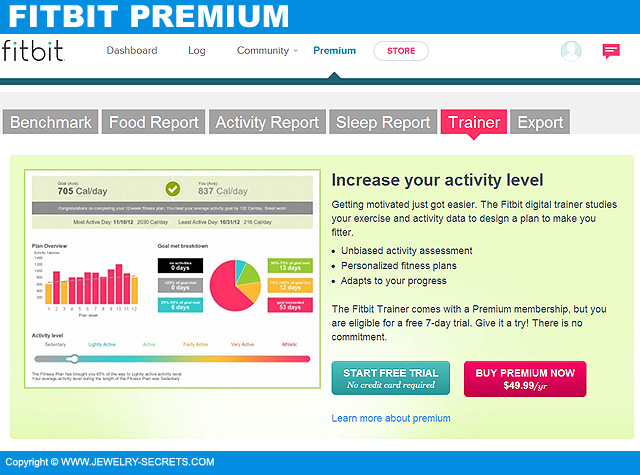 But that’s too much for me. HA!

So far, I’m LOVING the Awareness, Feel, and Extra Steps I take.

That’s Something you really Can’t Get Enough of.

It Certainly gets my Heart Rate going! :)

Get your Fitbits HERE at Amazon!