I’ve held Two Different Themed Parties in the Last 6 Years and we all had a RIOT! (The First was “Pasta, Pasion and Pistols“, that was FUN, the last was a Trailer Trash Tragedy Game that was to DIE for! What a Freaking Hoot!)

But Today’s Murder Mystery is all about DIAMONDS!

They say Diamonds ARE a Girl’s Best Friend, well NOT with this Intriguing Murder Mystery Game…

This Game comes Equipped with Party Planners, Recipes, Music Tips and a CD that you Play throughout the Game.

Your Friends and Family get Invitations to the Party as well as Character Clues and Costume Ideas.

AND YES, the Costumes you Create Yourself make the Entire Game!

You’ll Laugh your Ass off!

This Game, called “Inspector McClue, Diamonds Aren’t A Girl’s Best Friend” is all about Murder and Mayhem.

When the Guests arrive to the Party, everyone is Suspect! A Murder happens (Fake of Course), and you (Who don’t even know who the Murderer is either) and the Rest of the Suspects get to Play along, Read Lines, and Question Each other to see if you can Figure out… 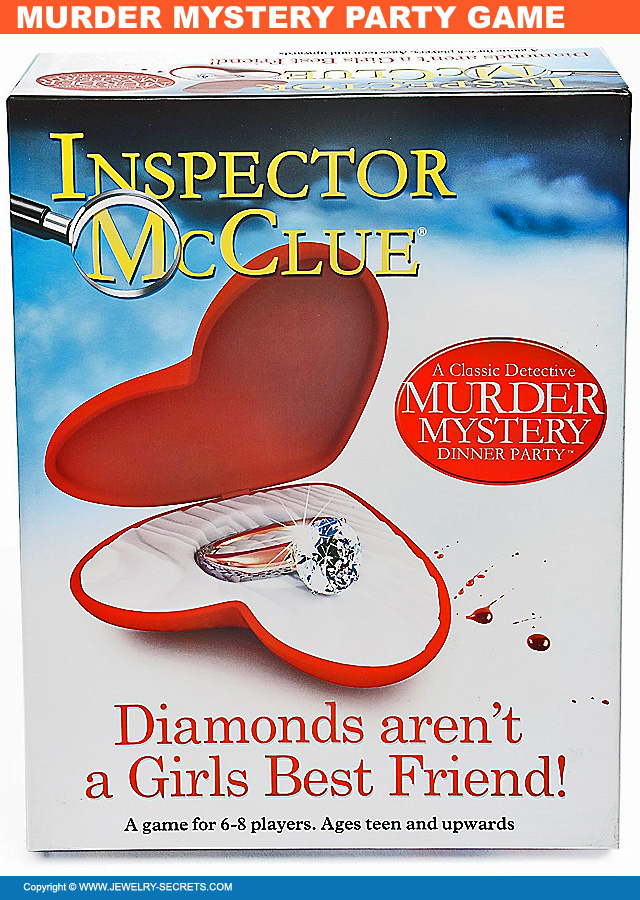 Are you the Next Nancy Drew?

The Description Reads as Such:

Everyone’s a Suspect when Murder is on the Menu. And with a Classic Detective Murder Mystery you have everything you need to Serve up the Perfect Murder Mystery Dinner Party. First the Invites, you choose which of your Friends Play which Devious Suspect and Invite them to come along as that Character. Then the Shopping List, Menu Suggestions and Recipes. Plus of course…a really Tasty Murder to Solve.

It’s 1919 and the World is still Reeling from the Shock of the Russian Revolution. For those inside the Country, the Political Upheavals are Matched by Personal Tragedies, and nowhere is this more true than within the Russian Royal Family. The Tsar, his Wife and Children have all been Killed, and the Surviving Royals are Anxious to Escape the same Fate. Sailing into Exile on Board the British HMS Winston a Stowaway is Discovered on Board on the Second Night. He’s Found Face-Down in one of the Lifeboats, and he has a Jewel-Encrusted Dagger Stuck in is back. Who is this Mystery Man? Who Killed him? And what does any of this have to do with the Assassination three years earlier of the Mad Mystic, Rasputin.

This Game is Guarantee to be Drop Dead Fun, and that by the end of the Evening one (or more) of the Suspects, your Friends will be Caught out as the Murderer! This Game is for 6 – 8 players and Suitable for Ages Teen and up.

You’re Just Going to LOVE it when the Actual Murderer is Discovered!

The Game comes with Character Books, Roles, and Descriptions.

That’s Right, you get Secret Background Information that Players have to Uncover to Piece the Murder Together! SWEET!

You’ll have so much Fun, you’ll talk about it for YEARS!

And see all the Different Murder Mystery Party Games HERE!