Piqué clarity (often abbreviated as P, or PK in Europe) is a pretty common clarity grade.

In fact, Piqué clarity is one of the largest clarity grades there is.

(And no, it doesn’t stand for soccer player Gerard Piqué)

So what is Piqué clarity?

And that’s because in Piqué clarity, these marks or blemishes (inclusions), are visible. Visible to the bare eye, without the use of a microscope or a 10x jeweler’s loupe. You can see the flaws just by looking at the diamond, and often, these flaws and imperfections are huge.

P1 is the highest of the bunch, then P2, followed by P3 at the bottom of the bucket (P3 is the lowest clarity grade there is).

Piqué is used in just about every country, even the US. But since GIA devised the standards for grading diamonds (the 4 C’s), and they called this lowest clarity range “included” or “imperfect“, that’s what is common in the states, and that’s what most people know and use.

You will still see “Piqué” sold in stores today if you look hard enough. It all depends on the actual grading report that came with the stone. 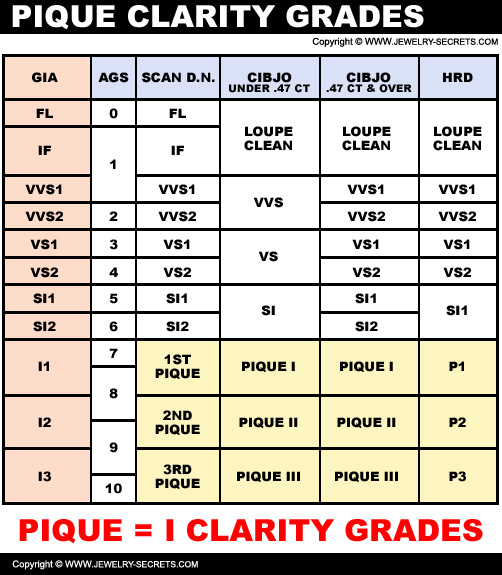 You see, Piqué really does line up perfectly with the “included clarities” of I1, I2 and I3.

Many times online stores or even store’s catalogs will list the term Piqué or PI, PII, or PIII. And as long as you know that it means “included“, and that you will see eye-visible flaws and inclusions in the stone, then you won’t be surprised when you suddenly notice a huge black mark in the stone.

Piqué, as well as I clarity, is the lowest grades that diamonds can get before they veer off and become “industrial” diamonds.

You will see flaws.

You will see flaws and things like: lines, cracks, clouds, pinpoints, fractures, nicks, chips and black spots. That’s just the nature of included or Piqué diamonds.

I would suspect that some jewelers in the states take advantage of this not so commonly used Piqué clarity grade. Piqué sounds better than included. And what people don’t know, won’t hurt them, right?

But now you know.

They’re pretty easy to spot, once you know what to look for…

If you don’t mind some visible flaws, and want to save a ton of money, check out these I1 included diamonds here. Some stones look way better than others.

4 Comments on WHAT IS PIQUE CLARITY?