Peridot is the official (one and only) birthstone for the month of August.

Peridot, pronounced Per-Ih-Doe (the T is silent) is actually from a parent stone called Olivine, which is a silicate of Iron and Magnesium.

Deep green shades (without any traces of brown) is the most valuable color there is. But the more common color is from the more commercial grade peridots produced right here in Arizona. They have the more lime-green yellowish hue that we all know and love.

See all the different colors of peridot here… 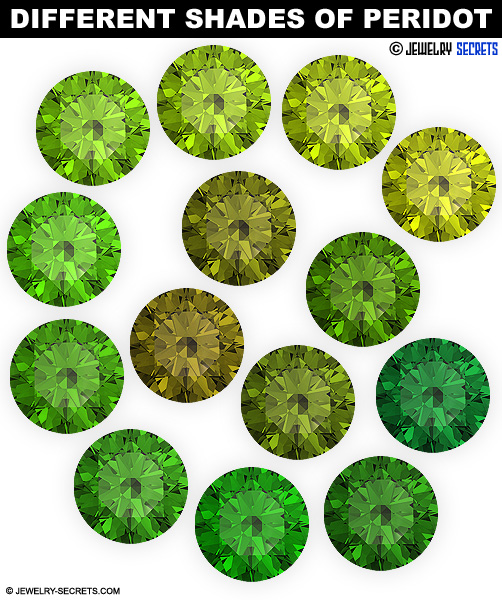 Peridot has been around for a long, long time. Mentioned way back in the Bible and adorned by the Egyptians, peridot has been said to possess magical powers. Being named the gem of the sun, it attracts wealth and drives away evil spirits.

Who wouldn’t want one?

Even queen Cleopatra’s famous emerald is said to have been a peridot.

That’s because fine quality peridot can mimic and give off the appearance of a great emerald. 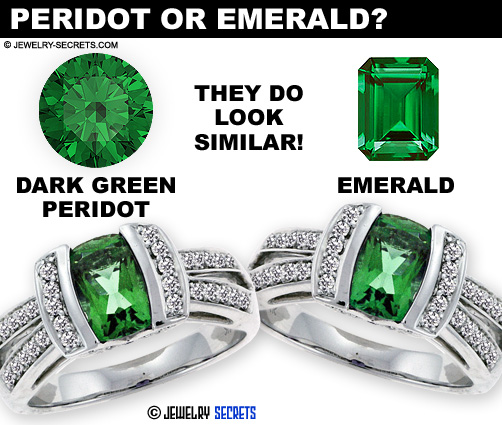 Mistaken identity has followed peridot throughout history. Originally called “topaz” because it was found on a Topazious Island (Serpent Isle) in the Red Sea.

We now know how to identify peridot, and it’s properties make it very unique.

The hardness and toughness of peridot makes it pretty safe to wear every day, although it is best suited for pendants and earrings where they won’t take a direct hit like a ring would.

Wearing peridot in rings is fine, you just should be more careful and cautious with them.

Watch out for heat.

One thing that you should watch out for is heat. Heat and rapid temperature changes. 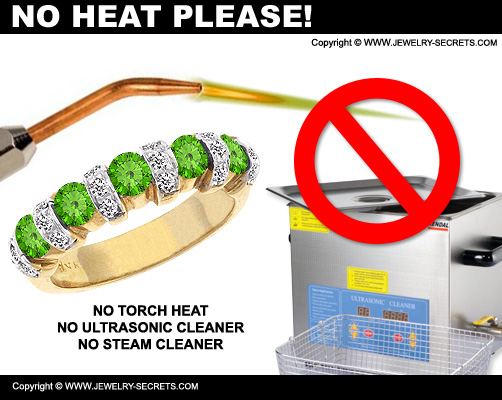 Heat from ultrasonic cleaners, steam cleaners and jeweler’s torches, as well as sudden shifts in cold to hot, can fracture or crack your stone.

It’s best, when you’re cleaning your jewelry, to clean them by hand in mild soapy warm water. Avoid the heat. Just to be safe. :) 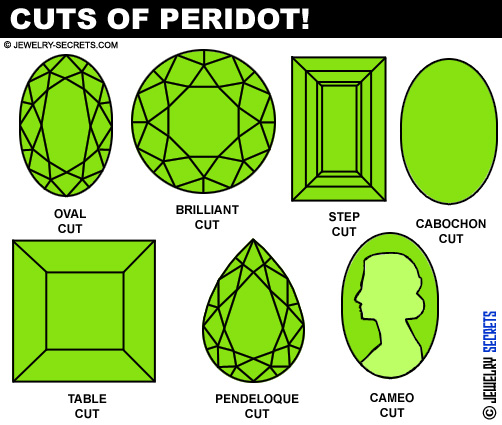 It’s actually produced from volcanic rocks and lava flows called basalts (which is why peridot is the diamond of Hawaii).

The great thing about peridot is the fact that it’s pretty inexpensive, even for large carat weights.

It’s also one of the very few gemstones that isn’t heat treated to improve color. Peridot color is genuine and pure. It won’t fade over time. :)

This clean, transparent gem is one of those stones that you either love, or hate. There is no in-between. Lime green does that to people. 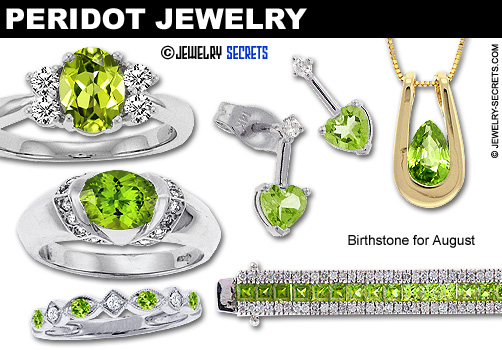 Personally, I love this gemstone and think that the hues and variations are wonderful.

Some stones are so rich and bright they almost glow. It’s easy to understand why Egyptians thought the stone actually glowed in the dark (and was invisible by day).

King Edward VII of England even wore peridot as a good luck charm.

And that’s not the only meaning this gemstone possesses…

The meaning of peridot:

The list of meanings for peridot is impressive. Being associated with both astrological signs Leo the Lion (July 23rd – August 22nd) and Virgo the Virgin (August 23rd – September 22nd), it’s been said to aid, help and give: 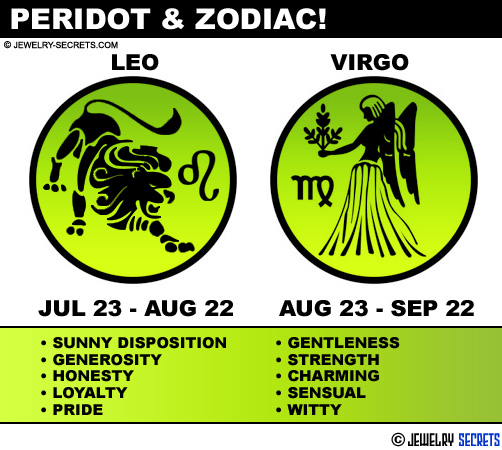 All of this from the August birthstone.

Interesting enough, this gem is also called “chrysolite” (meaning golden stone) when it appears more on the yellow side of yellowish green.

AND… Peridot is the only gem (other than diamond) to come from outer space as a constituent in meteorites. 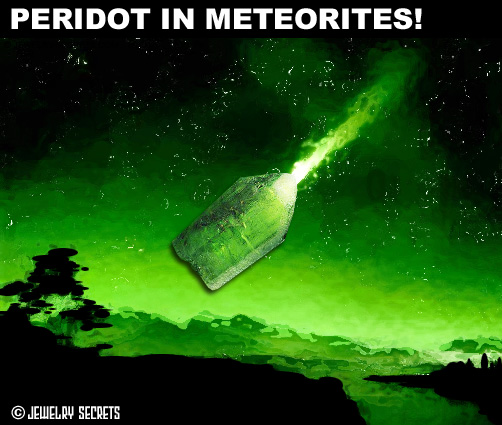 “Moon Rocks” is what they call them.

Peridot is a gemstone that can be used for both the 1st and 16th Wedding Anniversaries.

It’s oily and glassy appearance makes some beautiful styles and designs and is quite popular with local artists, craftsmen, and jewelers, as seen here… 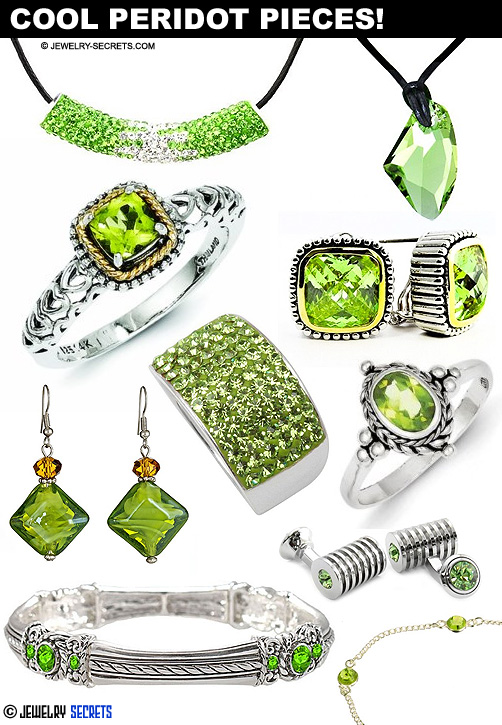 Peridot is also a great gemstone to use for Chakra as well.

Use peridot for the Heart Chakra, which is the 4th Chakra (behind your heart and center of your body). It’s been said that peridot can promote the search for enlightenment.

Some say to put peridot by your bed at night, or even underneath your pillow for it’s healing properties.

So what does this Heart Chakra, the feel good stone, cure? 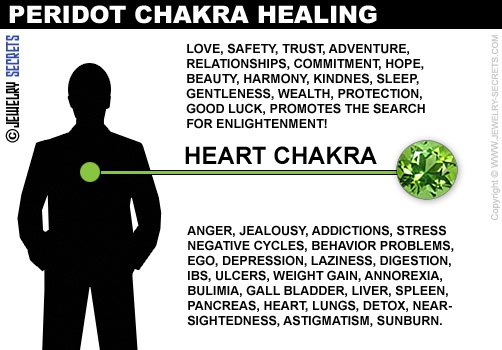 The Heart Chakra is the center of love and compassion. It’s your energy hot spot.

Which also helps with:

In other words, it balances out all the other Chakras and centers them.

You didn’t know peridot has such benefits did you?

Buy a peridot that has a nice, vivid color (I would stay away from real pale colors), and you’ll have an awesome gemstone that has been praised and valued for centuries, and centuries to come… 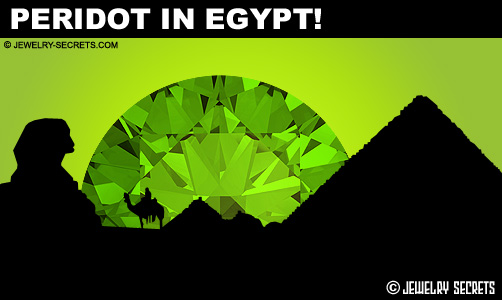 Do peridots have magical powers?

But if it’s your birthstone, why not give it a shot?

It’s inexpensive enough, and if it helps with your mind, body and soul, then it’s well worth the price you pay.

Get your peridot gemstone jewelry HERE.