Did you ever notice how one SI2 Diamond could look totally Different than another?

One Diamond could be almost Perfectly Clean, except for a Few Lines in the Center of the Stone. While another could be so Full of Debris and Inclusions that it looks like a Treasure Map.

Take a Peek at these Two Diamonds shown below (And really, you could do this with ANY Clarity, I’m just using SI2 as an Easy Example).

Both Stones are SI2, but Appear much, much Different. 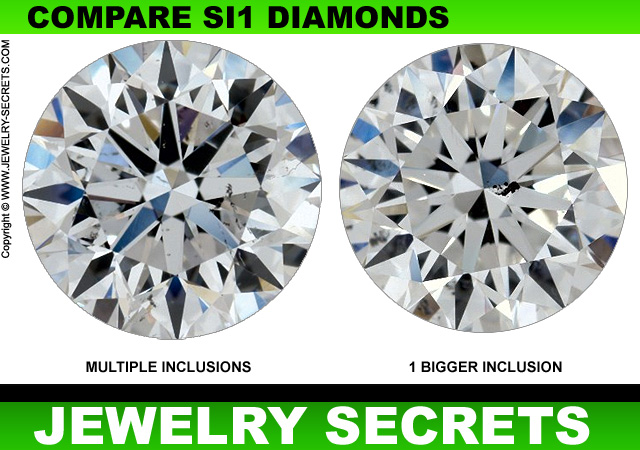 Now there may also be a Visual Difference due to Cut and Color, but there’s no Denying the Fact that one Diamond Appears way Cleaner!

It makes you think that one of the Diamonds is Graded WRONG!

Or even that they’re Graded by Different Grading Companies (which is usually the case).

These are BOTH Graded by GIA (The Best in the Business).

So WHY the Visual Difference?

It’s because Grading is all based upon Opinion and Experience. Every Single Diamond has to be Graded Separately and Independently.

Familiarize yourself with the Diamond Clarity Chart below… 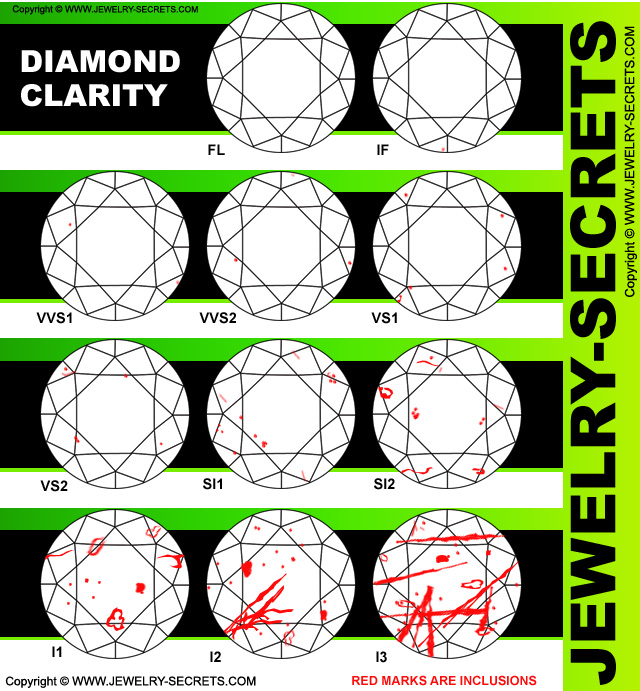 There are no Exact Specifications for Grading Clarity that makes it Cut and Dry. Nothing says that an SI2 Diamond MUST have at least 4 Inclusions or more.

It doesn’t Work that Way!

For there are a lot more things to consider when Grading Clarity.

So let’s take a look at what makes up the Clarity of a Diamond.

And it all comes down to the Actual Inclusions…

Inclusions are Graded by This:

The Size of the Inclusion

The Size of the Flaws is Crucial to the Clarity of a Diamond. Because if it gets TOO BIG, then it can become Very Obvious without Magnification (using a Microscope or a 10x Jeweler’s Loupe), and that changes the Grade Entirely!

Eye-Clean Diamonds on the other hand, are generally SI2 or Higher, meaning viewing the Stone with the Naked eye, no Magnification needed.

So the Size is a Big Selling Point to Determining the Right Grade.

The Position of the Flaw

Where the Imperfection Resides inside the Stone plays a Huge Role in the Diamond Clarity Grade. Most Grades have 2 Levels (Level 1 and Level 2, as in SI1 and SI2, or VS1 and VS2)

And for the Most Part, these Clarities are very Similar as far as Appearance goes. But usually, the Level 2 Stones will Feature Flaws that Fall Closer to the Center of the Stone. Where as Level 1 Flaws will normally Fall more towards the Outside of the Stone where they are Hidden under the Crown Facets better. 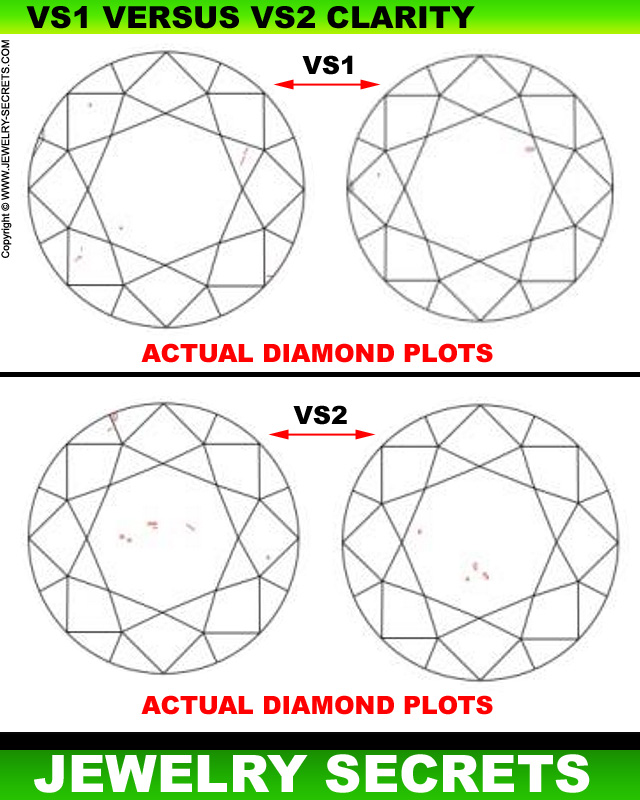 See how the Level 2 Diamonds have Inclusions more Center of the Stone?

The Color of the Inclusion

Many people don’t consider the Color of the Inclusion, until it’s too late.

For a “White” Inclusion is far better Visually, than a “Black” Inclusion that Sticks out like a Sore Thumb.

Both Diamonds below are I1 Clarity Stones… 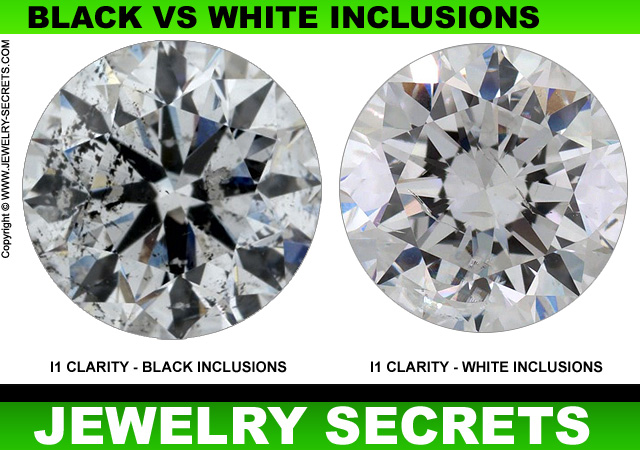 The Black Flaws are Obvious and Noticeable, and the White Flaws almost Disappear from View. :)

The Number of Inclusions

If you have ONE Flaws Dead Center (the WORST Possible Place for a Flaw), versus Tons of Smaller Flaws Spread Throughout the Diamond, it will look Much BETTER!

Everything in Nature has some sort of Birthmark or Identifying Characteristics about them. And the Amount of these Imperfections can really make a Huge Impact on the Look and Feel of the Stone.

Compare the Two SI1 Diamonds below… 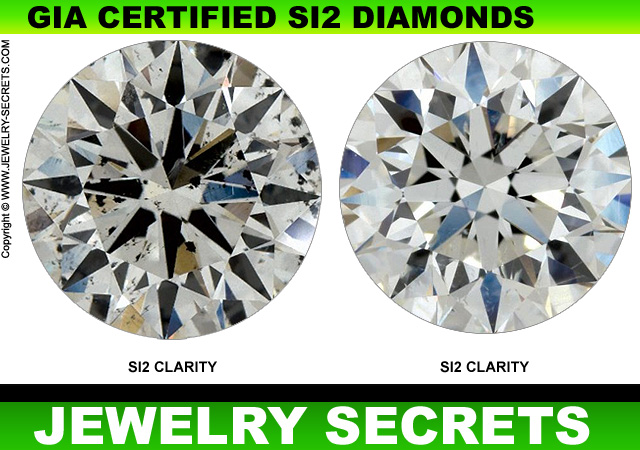 See what I mean?

The Relief of the Inclusions

How Thick or Thin the Inclusion is, affects the Overall Beauty and Sparkle of the Stone. Some Inclusions are Lines, Pin-Points and Feathers… Others are Black Carbon Spots, Fractures and Cracks.

The Thickness of these Flaws can affect whether it’s Visible from a Top-View or Side-View, and whether the Flaws Stop Light from passing through the Stone, making it Sparkle Less!

Inclusions can Grow Horizontal or Vertical as well. Meaning, the Appearance of them from the Top View or Side View can be Drastically Different. 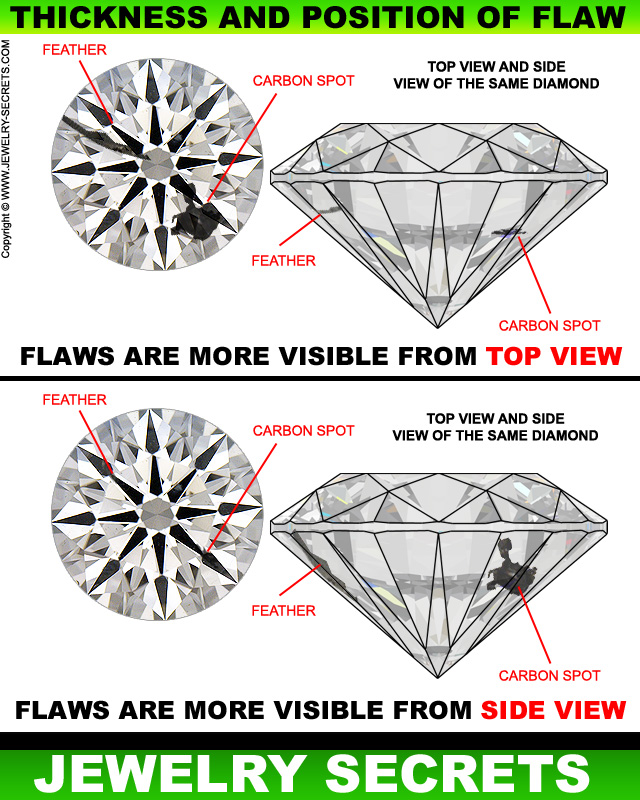 The Nature of the Flaw

What type of Inclusion is it?

A Fracture that Runs Longwise across the Stone?

They all change the Appearance of the Diamond, and the Opinion of the Grader.

There are two main types of Flaws that are Classified in Diamonds:

Internal Flaws are simply called “Inclusions“. They Reside INSIDE the Diamond.

External Flaws are on the Outside of the Stone, on the Surface. They are called “Blemishes“.

“Inclusions” are Listed as these on a Diamond Report:

“Blemishes” are Listed as these on a Diamond Report:

So you see, there’s a lot more to Grading Clarity than just a Clarity Chart and a 10x Microscope (What they use to Grade Diamonds with).

It’s Judging each and every Flaw, Size, Shape, Nature, Orientation, and Determining which Clarity Grade is Appropriate and Best for that Particular Diamond.

That’s why it’s Best to View Many, Many Diamonds of the Same Clarity Grade in order to Find the Best Diamond for YOU! 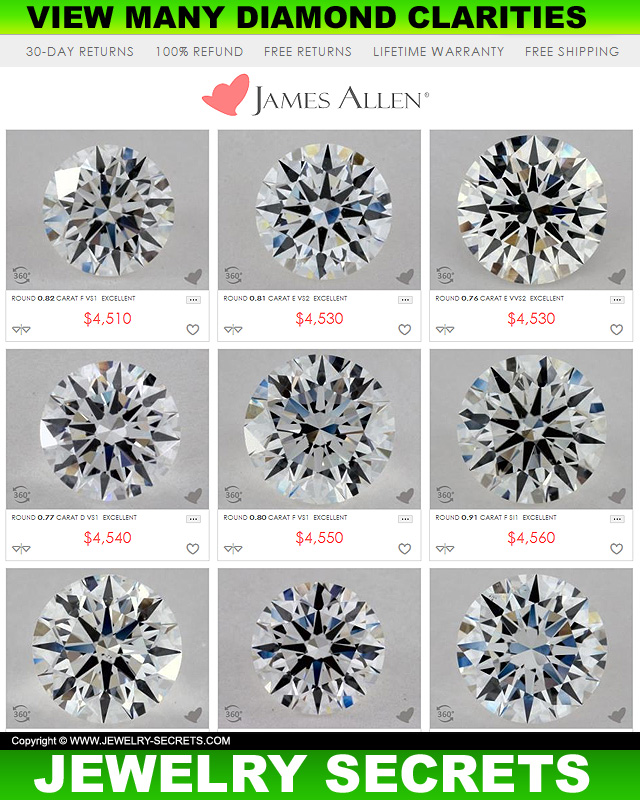 GIA all the Way Baby!

And, GIA is the ONLY Certificate (Diamond Report) that I truly Recommend Buying (AGS is a Close Second).

GIA is the BEST there is, and the Most Accurate Grade you can get.

And that my Friends, Brings TRUE Clarity!

5 Comments on HOW DIAMOND CLARITY IS GRADED