Questions come up just about daily about Diamond Fluorescence.

“Does it affect the Clarity or Color of the stone?“

“What does it do to value?”

I’ve said it myself because most people don’t know what Fluorescence is and without viewing Diamonds for years and years, they won’t know how some Diamonds can react to light in a weird way.

So then let’s begin…

Diamond Fluorescence is when some elements of the Diamond mix with other elements (Aluminum, Boron, Nitrogen) in the Earth upon forming millions of years ago, which causes these special rare stones to Glow in the Dark under a Black Light (Ultraviolet Radiation), Xrays, or other types of Radiation. 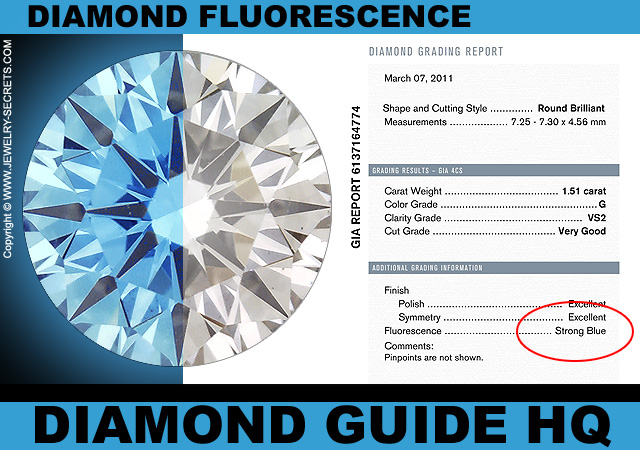 P.S. The Diamond shown above with Strong Blue Fluorescence has these specifics:

The Glow that a Diamond can get can be of many different colors: Yellow, Orange, Red, Green, Blue, Violet and even White.

This Glow lasts as long as the Ultraviolet Light stays on.

If the light goes off and the Diamond continues to Glow, then that’s called Phosphorescence, which is the after glow.

Diamond Fluorescence is listed right on a Diamond Report (like a GIA Diamond Certificate) under a section called Fluorescence.

Fluorescence isn’t a part of GIA’s 4C’s: Cut, Color, Clarity and Carat Weight, it’s in a class all by itself. Fluorescence used to be listed on GIA’s report under Color Grade years ago (on older GIA Diamond Certificates), but not anymore. It’s now listed under just Fluorescence.

The reason behind this is simple, a Diamond with Fluorescence can sometimes make a Diamond appear whiter in Color and that can become a little misleading when people think it’s actually the Color of the Diamond that they’re seeing.

Fluorescence being split off by it’s own, just makes sense.

Plus, Fluorescence makes identification easier. It’s another way of looking at a stone and saying “Yes, that’s my Diamond“.

Here is Fluorescence on an older Diamond Report… 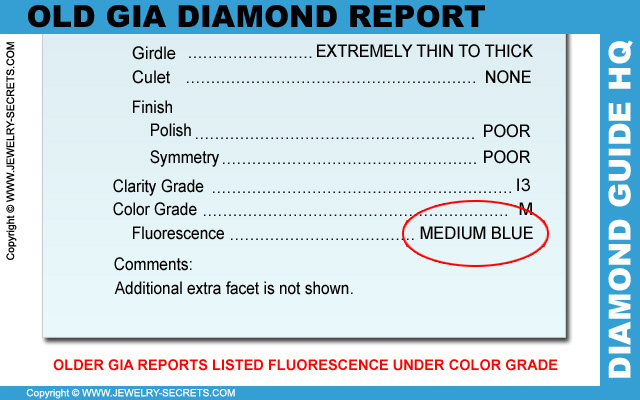 And here is a new GIA Diamond Certificate with Fluorescence… 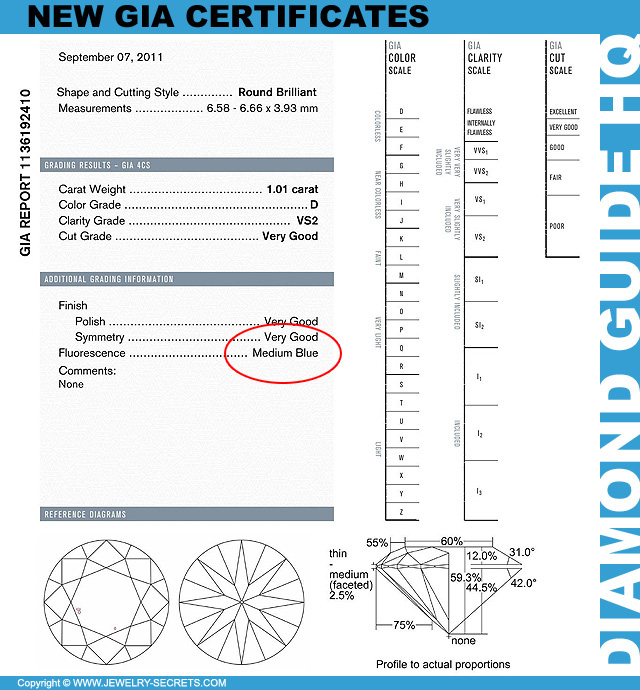 People are fascinated by Diamonds that glow. They are pretty cool, but only if this phenomenon doesn’t affect the beauty of the stone.

Is Fluorescence worth it?

There is no right or wrong about Fluorescence. Every Diamond that has these special traits will look differently and react differently with light (both Ultraviolet Light and natural light).

Some Diamonds with Fluorescence will take on a foggy, hazy or milky appearance (no matter what the Clarity or Color is).

Even a VVS Clarity Diamond can look lifeless if it has Fluorescence.

But then again, I’ve also seen lower Clarity Diamonds look great with Fluorescence. Each Diamond has to be judged individually and viewed in natural light to see how the traits affect that stone.

Some look good, some don’t!

This is why many people, including myself, say it’s easier not to purchase Diamonds with Fluorescence (unless you can actually view the Diamond you’re buying to see the results for yourself).

Fluorescence doesn’t affect the Grading of the Diamond in the least. You won’t get a lower Clarity or Color rating because of it. BUT, if a Diamond has Fluorescence, it usually does lower the value of the stone by 20%.

So looking at a Diamond with Fluorescence, could save you hundreds of dollars! 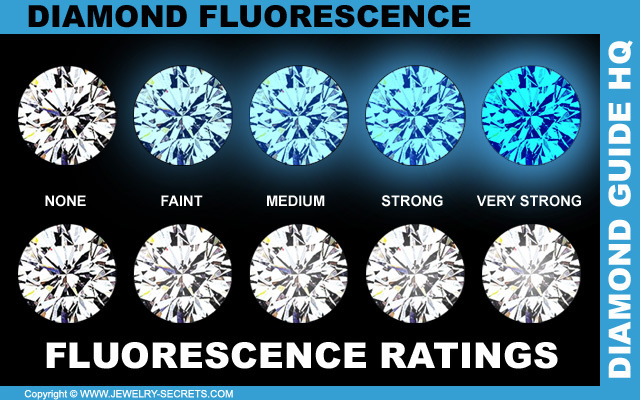 Let’s take a closer look at them…

If I had to choose a Diamond to buy with Fluorescence, I would choose Faint. They are less likely to have any great visual difference in the stone.

Faint may give your Diamond a slight, very slight filmy glaze, but most people probably would never even notice this. It just wouldn’t sparkle as much as the next Diamond, but like I said, this is probably very slight if not barely noticeable.

Diamonds with Medium Fluorescence will usually do a couple of things to a Diamond: It will look a little hazy, and it may even make the Diamond look a little whiter in color.

Not all Diamonds with a Medium Fluorescence will look hazy, each Diamond has to be scrutinized to tell, but a Medium Glow will usually change the look and feel of a Diamond more often than not.

These Diamonds glow very bright under Black Light. They really look stunning and awesome in the dark, but chances are, it will also make a High Clarity (like VVS or VS) look foggy, cloudy, milky and dull. It will make it look like a lower Clarity stone.

Again, not all Diamonds with Fluorescence, even Strong Fluorescence are affected in natural lighting. Some are, some aren’t. You have to view them to see for yourself and make your own buying decision.

You definitely can save a good chunk of money by buying a Diamond with Fluorescence.

Compare these two similar Diamonds below. Both are the same Color, Clarity, Carat Weight and Cut. But one has Fluorescence, the other doesn’t. Look at what it does to price…

When you see Fluorescence listed on a Diamond Report, it will also list the color of the Glow if it’s anything other than white. i.e. if the Fluorescence is Strong with a Blue Glow, it will list it as Strong Blue. See example below… 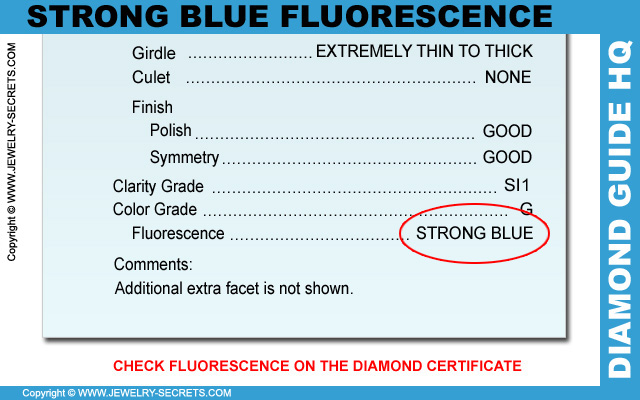 My rule of thumb is this, if you’re Buying a Diamond over the internet (I recommend James Allen – which saves you money), don’t buy one that has Fluorescence (just to be safe).

If you’re going store to store and checking out all the Diamonds, for sure, check out the prices on Fluorescent Stones. You can get a great looking Diamond with no visual differences if you look good enough. You can also save some good dough.

It’s worth a look!

Because a Diamond that glows in the dark, could be a very, very cool stone to own! :)