Let’s really dive into I1 clarity diamonds and learn their true meaning.

There are 6 clarity ranges in all when it comes to diamonds, GIA, and grading. They are: FL, IF, VVS, VS, SI, and I.

The lowest range is the I clarity range (the highest is Flawless).

This I clarity range is actually broken up into 3 different grades:

(see the diamond clarity chart below) 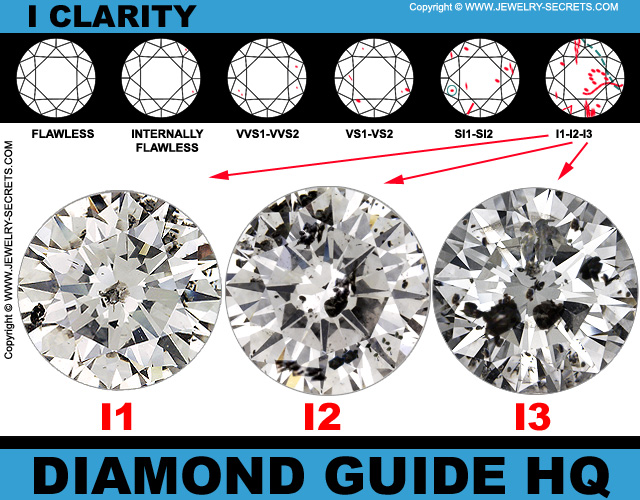 I1 is the best of the bunch.

But being the best, doesn’t really mean that you’re getting a good diamond. It simply means that it faces up better than the I2 and I3 clarity stones.

“Included” is the technical term, but most people just refer to them as “eye-visible“.

That’s because you can see the inclusions, flaws or blemishes with the bare eye (unaided with no loupe or microscope).

But here’s where it gets tricky… It only takes 1 visible inclusion for a diamond to be labeled as an I1 included stone. Just 1. So you could have 10 flaws in a diamond, with only 1 of them being visible, and that would be enough to drop the clarity and the quality of that stone down to an I1, or included ranking.

Now, chances are pretty good that there will be more than 1 visible inclusion, in fact there’s probably a lot of them, but you really never know until you look at the stone.

Every diamond is different, just like people who have moles, freckles and birthmarks. See a variety in flaws below… 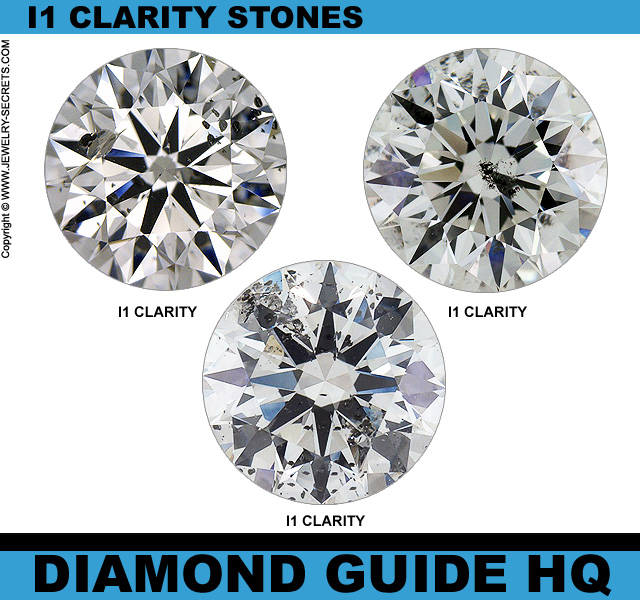 They all have different fingerprints and all will face up differently to the viewer and even under different lighting atmospheres (daylight, fluorescent, incandescent, halogen, tungsten).

The one thing that’s constant and common among all of them is that at least one of the flaws is visible without magnification.

So it doesn’t matter how many there really are, where they fall inside the stone, what size or color they are, it’s just that you can see them.

So the entire diamond really could be flawless except for one tiny visible carbon spot, and that stone will then have to be graded with the lowest clarity range on the market.

There’s no way around it.

Visually, and under magnification (like the ones shown below), they could be worlds apart as far as looks are concerned… 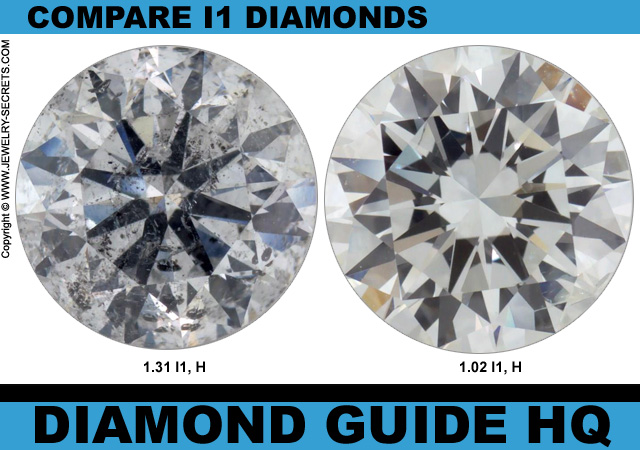 So what I’m saying is this:

Don’t dismiss I1 clarity diamonds just because they have eye-visible flaws. Half the market is made up of I clarity stones and for the most part, it’s no big deal.

This is especially true if you’re dealing with smaller stones (like under 1/3 carat), or with pieces of jewelry like bracelets, earrings or pendants, where people won’t get close enough or scrutinize them like they would an engagement ring.

Smaller diamonds tend to hide flaws better. But larger stones, like 1/2 carat or bigger, tend to make them easier to spot and they start to stand out and get noticed.

Otherwise, it’s almost not worth the crazy investment for a better clarity. Compare the two different diamond clarities below… One is I1 clarity, the other is VS1… 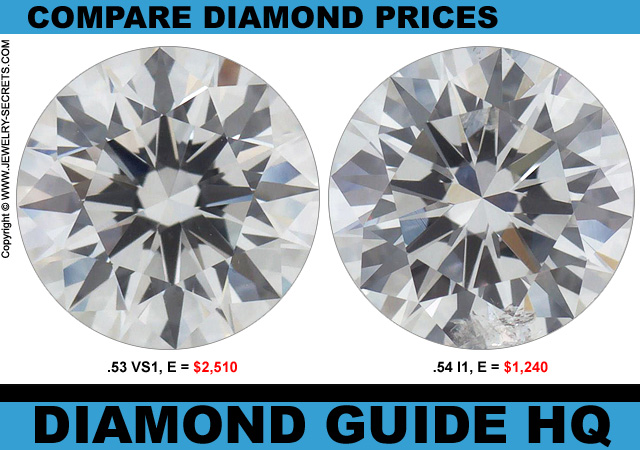 The difference in price is double.

All diamonds, regardless of clarity, size, color or cut deserve closer inspection.

Some stones face up more like their expensive pals. They really do. Which means, you could buy a stone that looks great, but is way cheaper because of it’s clarity grade.

And… If you get the right stone, with the right inclusions, you could always cover those flaws up with the ring mounting or prong. That’s great news.

Look at them closer. Compare them. There are some great I clarity stones, and they really are way cheaper.

Keep in mind, if you get an I1 clarity stone with an excellent cut, and with a nice white color (like the one above), that diamond would probably look better than a higher clarity stone that has lower color or cut.

I mean, this stone really rocks! 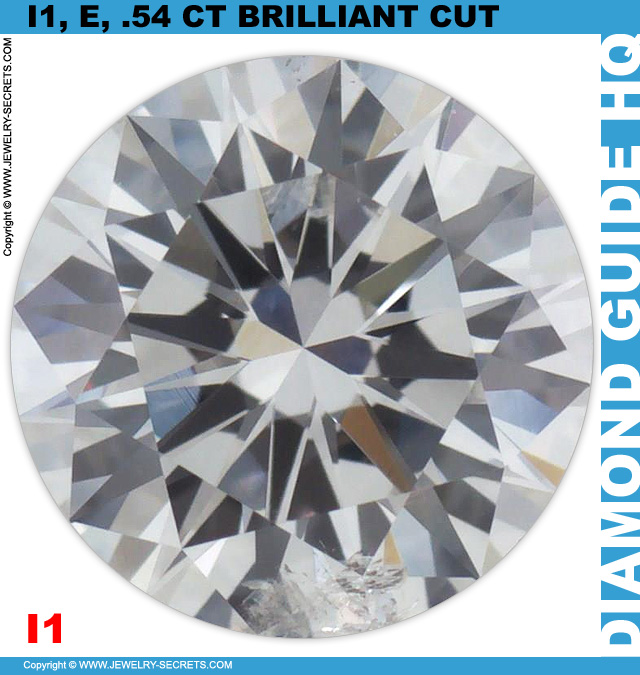 Here’s this awesome diamond, just cover that flaw up with a prong. :)

So check them out.

If you can steer towards “white” inclusions versus “black” inclusions, do so. White inclusions tend to blend in with the stone and not be so apparent.

But above all, enjoy the savings.

It could bring the cost of that stone down in half.

And that’s a lot of dough.

So while the diamond will have some flaws that can be seen with the eye, I wouldn’t worry about it much.

The truth is, most people would never notice these small imperfections unless you pointed it out to them.

And who’s going to do that?

P.S. James Allen has some great deals on I1 clarity diamonds here.

Check them out today.