You know, “The Galleria of Jewelry“!

First opened in 1993 by the Signet Group (Sterling Inc.), which also owns other Nationwide Jewelers like: Kay Jewelers, Osterman, Goodman Jewelers, Belden Jewelers, Roger’s Jewelers, Shaw’s Jewelers, and Weisfield (Plus Many More), Jared has 253 Stores in 39 States (Jan 2015), and NO…

You Won’t Find Jared in the Mall!

Jared is the Flagship of the Company (Named after the Former CEO’s Son), and is a Stand Alone Store boasting 4,000 Square Feet of Luxurious Showroom and Merchandise.

…To Name a Few 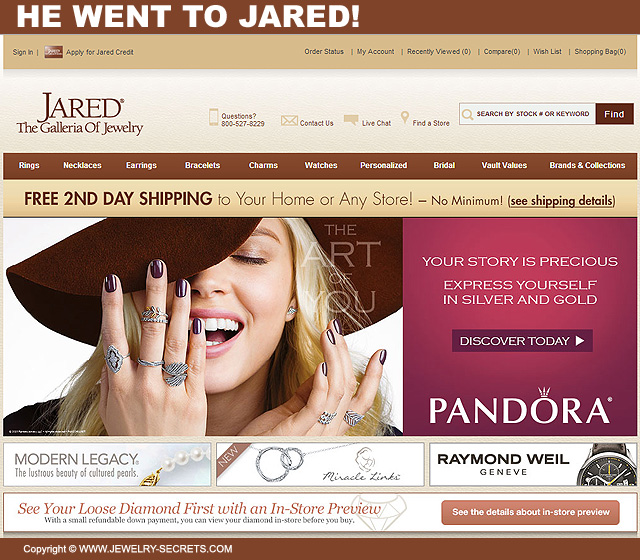 Starting out as the Cream of the Crop, with High End Merchandise, they Gained Attention Quickly with Great Marketing Lyrics like:

Heck, I find myself humming the Catchy Phrase Tune…

Along comes this Famous Tagline:

And Boy Did the Internet React!

Take a look at Urban Dictionary… 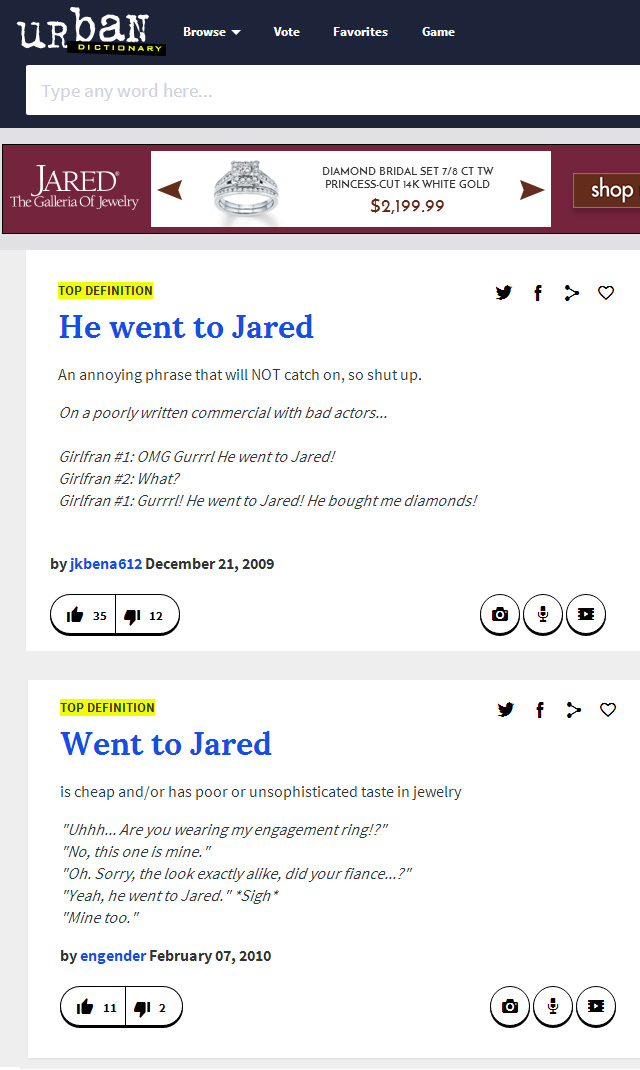 See! Originally supposed to Mean that he Went to Jared and Bought you some Really Great Jewelry (That she’d Love and Adore and Gush over).

But, it turned into something else…

Maybe it was their Cheesy Commercials where Women were Fawning over a Diamond Engagement Ring.

Or the Sassy Comebacks of Women that were Jealous.

Would you get Mad if he didn’t go to Jareds?

Maybe the Fact that some of their Commercials showed Cheap Diamond Pendants (is that High End???)… 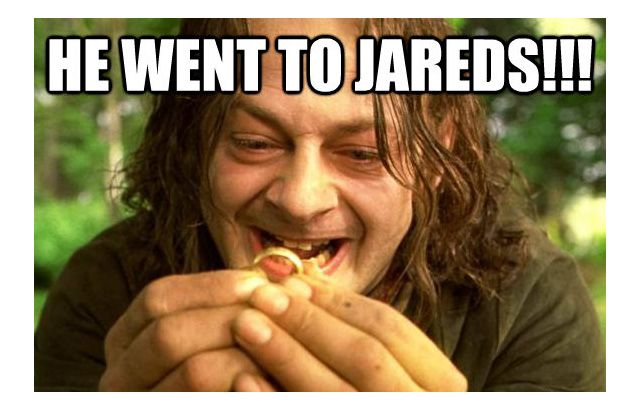 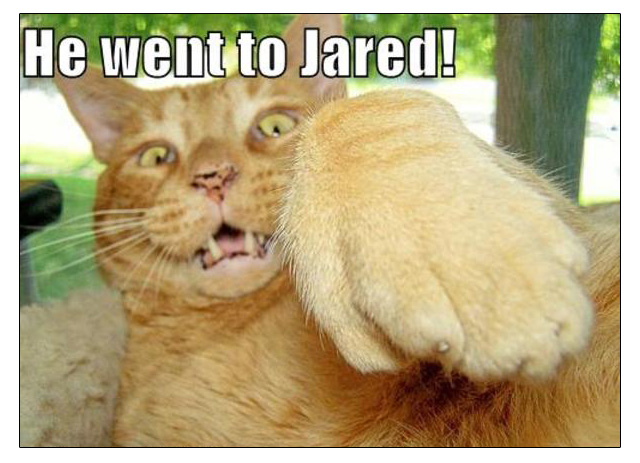 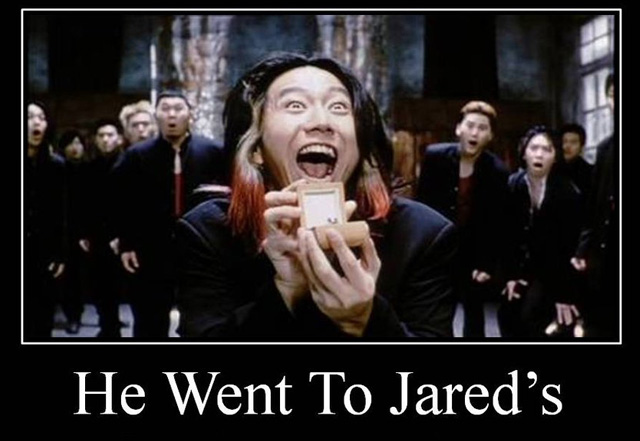 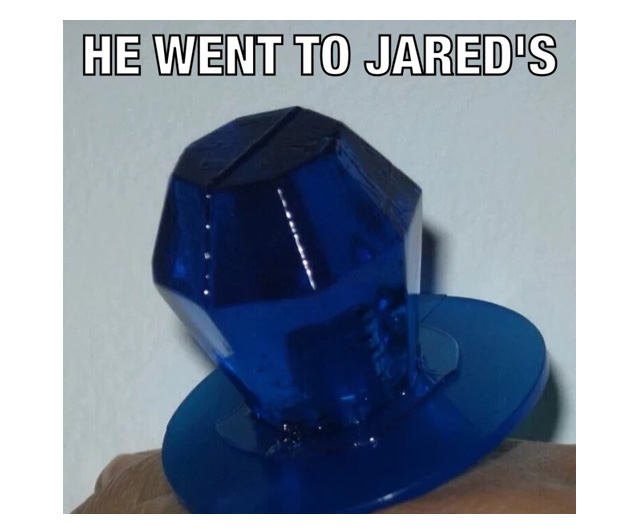 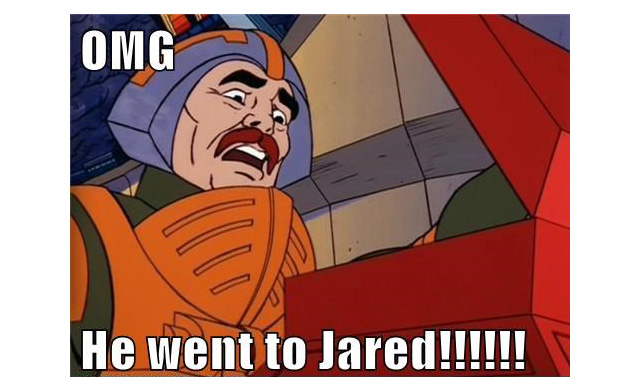 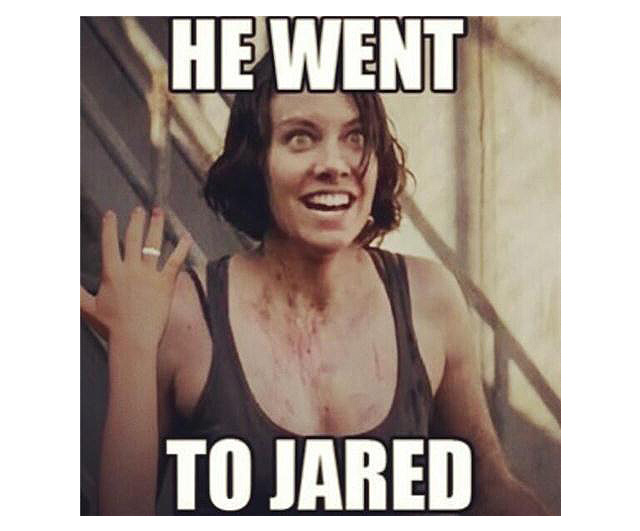 Not To Mention Videos

No matter what, the Line may Sound Corny, but you know what?

It does make you think about Jareds, now doesn’t it?

And why not, they do carry some Ultra-Awesome Jewelry… 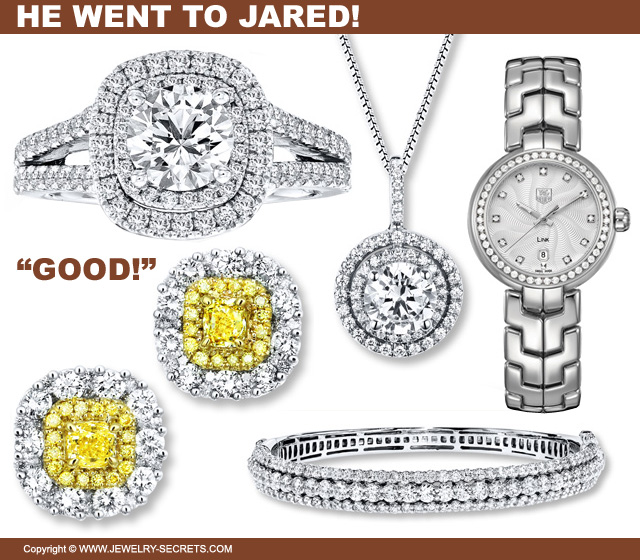 That is Beautiful Jewelry!

But they also Carry Some Cheap Goods too.

Here are a Few: 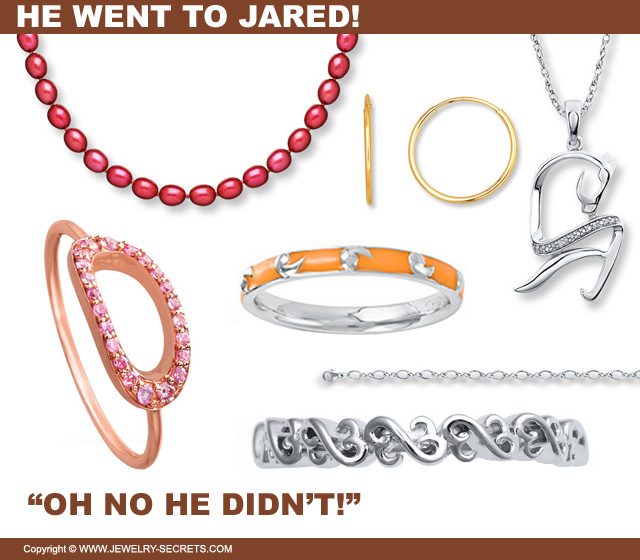 Now it’s True, they Carry High End Goods, Middle of the Road Goods, and Low End Goods… Just like every other Jeweler on the Face of the Earth. They carry a Mix to Fit Anyone’s Budget!

You Can’t Blame Them!

Plus, they do have some of the Best Policies on the Planet. You can’t Deny that.

And I will say that if he Bought you a Pair of Diamond Stud Earrings from Jareds, you wouldn’t Frown or be Insulted.

Like this Pair of 4 Carat Diamond Stud Earrings Here: 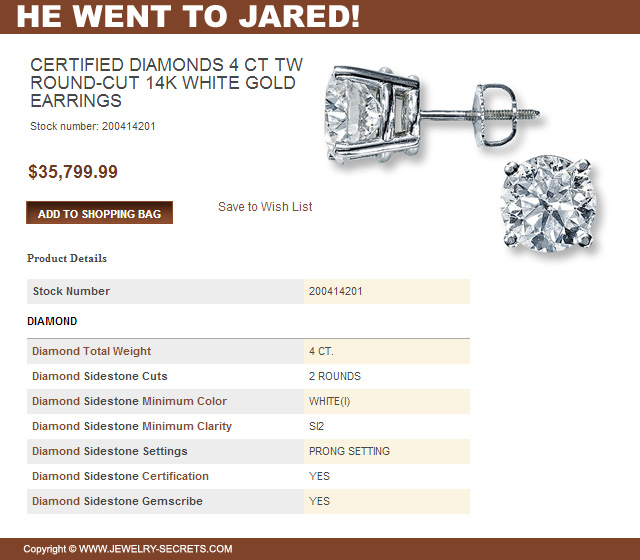 So we may Snicker at the Punchline, and if a Flight Attendant got on the Intercom and said “He Went To Jared“, I’d probably Laugh Out Loud.

But it’s still Diamonds, Gemstones, Jewelry and Watches, and if that’s where he goes, then the Tagline Works!

Good or Bad, it Proof of Advertising, and they’re all over the Net. 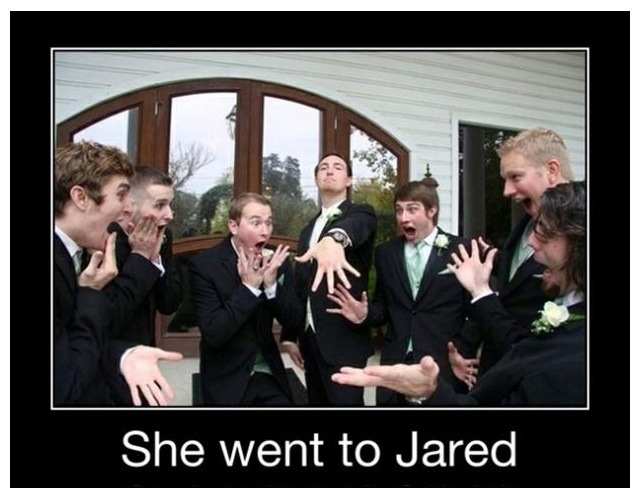 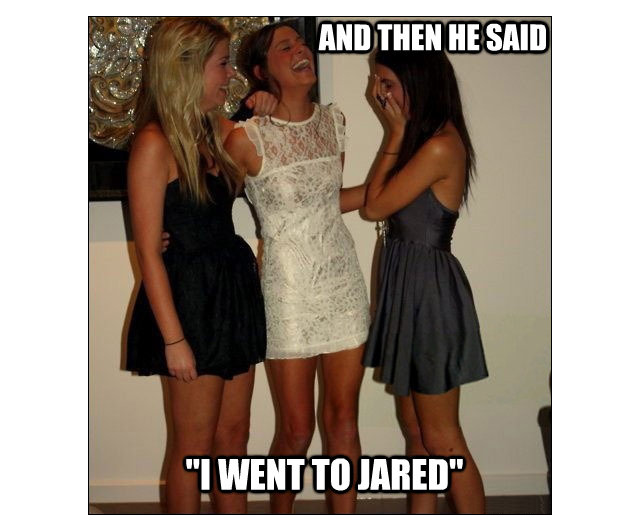 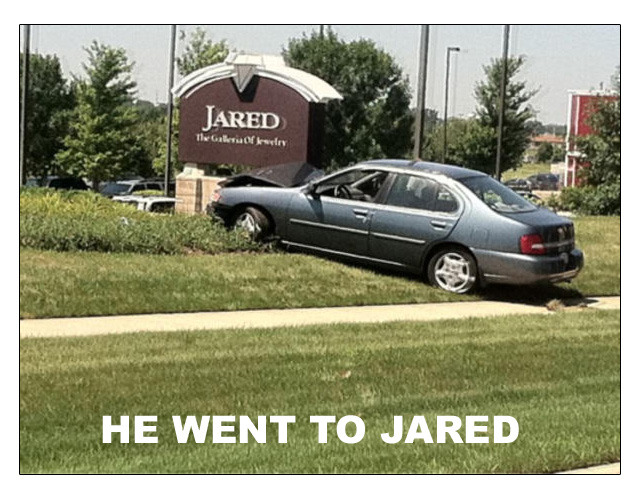 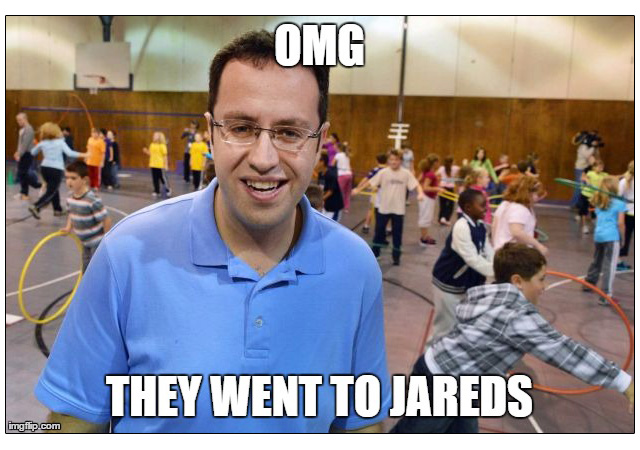 But hey, you get the Point!

Head over to Jareds NOW… Maybe she’ll Cry, Run into your Arms and Hug you…

Or maybe she’ll Step Back and think this… 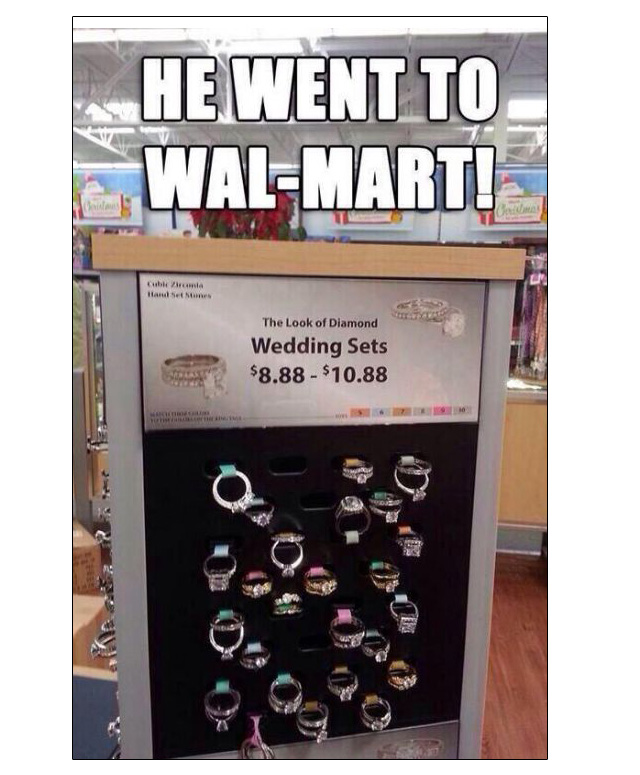 Because there’s only one Jared Jeweler…

Melodramatic or Not, they do have some Wonderful Pieces!

Take a Closer look at Jared Yourself!