When people think of Jewelry, there’s one name that comes to mind…

Tiffany & Co. jewelers has got to be one of the best well-known jewelry stores on the face of the earth.

They’ve led the industry in fresh trends and innovative designs since 1845. They are the ultimate jewelry store.

But that also inspires and creates tons of knock-offs and look-a-likes. Other jewelers compete for the customer’s buck with cheap fakes and frauds that resemble the real thing.

It’s not a surprise. It happens to all the big designer companies world wide. It’s just a fact of life.

Is the Tiffany ring real?

How are you to know if the ring you’re buying is a real Tiffany ring or a cheap knock-off? The seller says “It’s real!” Should you trust them? How can you tell genuine from a fake? Let’s take a look…

One of the most famous Tiffany rings is their “Tiffany 1837 Ring” (see picture). This ring is instantly recognizable and very distinct. It’s clean, it’s classy, it’s simplistic, it’s a work of art. I love this ring…

So I didn’t hesitate when I spotted their eye-catching blue-green bags, boxes and sterling silver rings at a flea market in Maui. The first thing I thought of when I saw them was Tiffany, no doubt. Their trademarked colors, bags and boxes are well known.

But Tiffany in Hawaii?

I took a closer peek. The first ring that I saw was their famous 1837 Tiffany & Co ring (listed as a “timeless tiffany favorite”.) At first glance, it does look like Tiffany…

A lot of people were looking at them and buying them. Green bags were flying off the shelves. Do these people not know these are fake? Do they even care? They may be thinking to themselves “No one will ever know the difference…” But I assure you, they will.

Because everything was different.

In just a couple of seconds I spotted a lot of differences between a fake 1837 rip-off and the real 1837 Tiffany ring. Here they are: 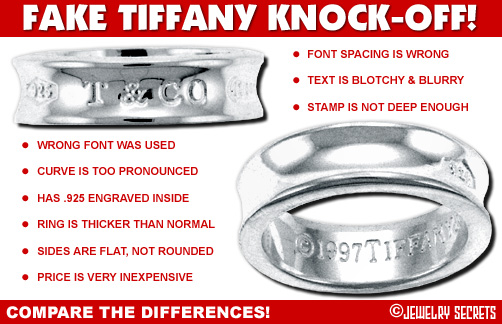 These fake knock-offs won’t fool anyone. They won’t last as long. They’ll look like junk in just a couple of months. Their shine will fade in a heartbeat. The rich luster and patina (surface shine) from Tiffany’s sterling silver rings and jewelry is priceless and beautiful. There is no comparison.

But how do you know for sure?

There’s only one true way of knowing if the Tiffany jewelry you bought is “real” or “fake“. Buy it from Tiffany! They’re the only ones that sell true Tiffany jewelry.
All the others are imposters, imitations, cheap, fake, fraud, and rip-offs. 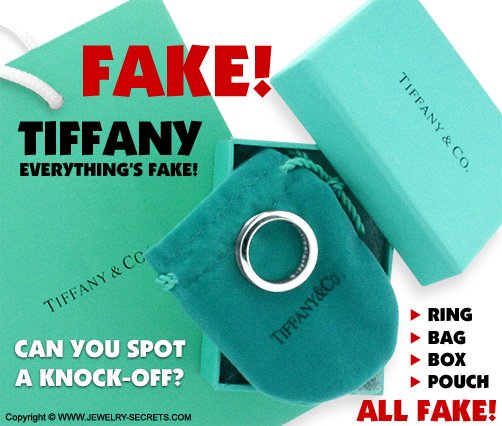 If you want a ring that’s well built and finely crafted. Where the lettering is crisp and perfect and the trademark is real.

Buy it from Tiffany & Co.

You ain’t no fool.