A customer walks in the other day, and asked me to see an SI3 Clarity Diamond.

I had to explain to her that we didn’t carry SI3 Clarity Diamonds, we only sell GIA and AGS Certified Stones.

She gave me a puzzled look “So who carries SI3 then?“

I respond “Only Jewelry Stores that sell EGL Certified Diamonds!”

I don’t make it a point to go around to all the different Jewelry Stores just to see who sells what. It could be a store in the mall, it could be a little independent down the street… I’m sure that there are stores that sell them… even though I can’t imagine many would.

Most Jewelers like to stick with more reputable grading companies (their own reputation is at stake after all).

There’s only one single company that grades with an SI3 Clarity, and that company is EGL (The European Gemological Laboratory). EGL is the only company that says there is one more Clarity Grade to the SI range (SI1 and SI2). Nobody else acknowledges it, and most would probably question it.

You see, GIA (The Gemological Institute of America) wrote the current system for Diamond Grading as we know it. This is of course, called the 4 C’s.

Just about every Jeweler and every grading system, Gemologist, Diamontologist, Appraiser and Store uses GIA’s guidelines for grading stones. Most do a fairly decent job at this. But none is as technically advanced and as strict as GIA and AGS (The American Gem Society). These 2 companies are the best and most accurate when it comes to grading Diamonds. I highly recommend them.

EGL… Not so much!

So let’s compare the EGL Clarity Grading Chart against GIA’s Grading System and AGS’s Grades, just to see where they all stand. 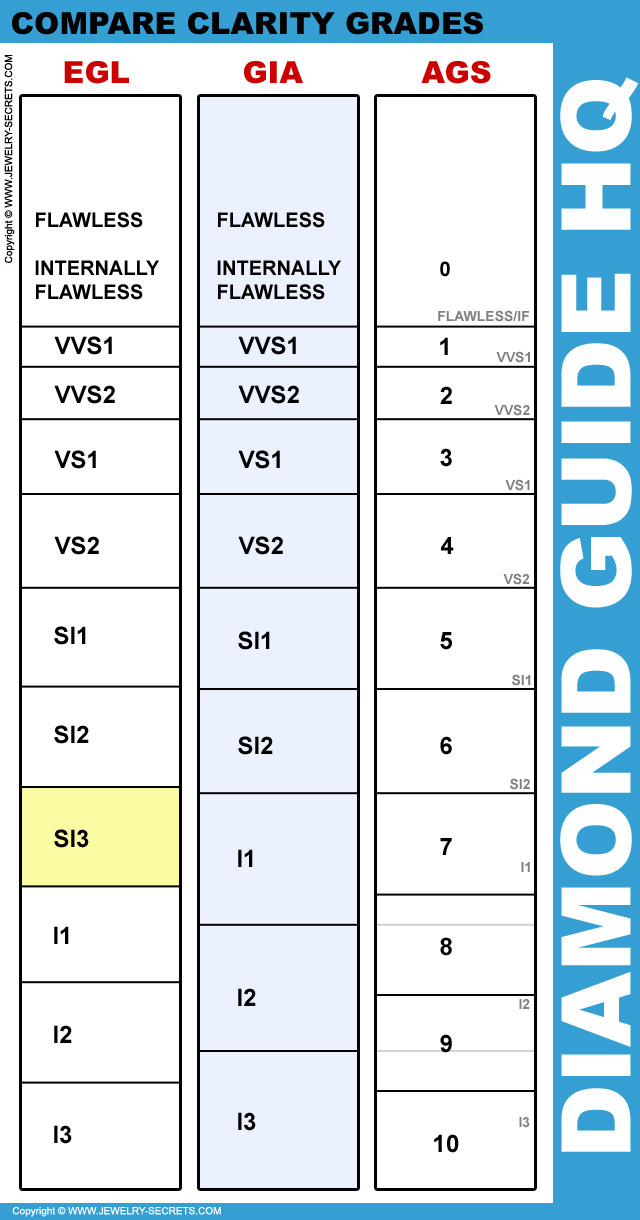 Now, I will say that this image may not be 100% accurate. As of yet I have never seen an official comparison of the EGL system side by side with GIA or AGS.

In fact, EGL’s actual grading system is pretty much non-existent. You can’t even find one on their own website.

I ran across one on an old EGL Diamond Report and that’s what I went by.

And even then, it was just about impossible to truly compare. Their grades were almost equal in size and not relative at all to what is found in nature (like GIA’s and AGS’s are).

So for the most part, I’m assuming this diagram is a fair representation based upon my own findings and my own experience (and a little Photoshop skills).

What’s interesting to note is that most companies agree on what is “Good” quality as we see. This is generally from SI1 Clarity or higher!

SI2 and lower is where things really start to fall apart with EGL.

They squish in that extra grade called SI3.

They say this grade is for Diamonds that have “Easy to See Inclusions” under 10x magnification. But in every instance that I’ve encountered, these “Easy to See” flaws, are what GIA will grade as an I1 Clarity instead.

Seriously, if a stone is better than an I1, why don’t they just call it an SI2? It would make more money if they did. The truth is, they don’t and they can’t! It’s not good enough.

SI3’s are really just nice looking I1 Clarity Diamonds. They face up well, but they’re still an I1 stone.

The main reason why some Jewelry Stores sell these stones is because SI3’s sound good and sell better than I1 does (plus it costs less to certify).

People hear SI and think it’s good… it’s the 3 that gets you!

Stick to GIA’s Diamond Report (or AGS at the least). They’ll tell you what the stone really is.

Plus, it also allows you to truly compare apples to apples. Because you really can’t compare an SI3 stone against any stone… SI3 doesn’t exist!

EGL Reports have always been highly skeptical in the Jewelry Industry. Their gradings may not be so accurate. Take it with a grain of salt. I’ve seen some EGL Grades be off by as much as two whole grades!!! Ouch!

So the next time that someone comes in and asks me to see an SI3 Clarity Diamond, I’ll just pull out an I1 Clarity Stone instead…